Was THE TROLLEY SONG a secret Light Rail cheer?
Was this about St. Louis or Yosemite? A case could be built for the later. 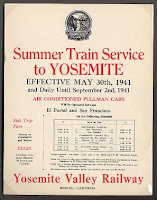 No where near St. Louis, but there are hints of this story in the song

The stage presentation features a trolley similar to the Pacific Electric Mount Lowe - Echo Park excursion line. Certainly from the lower photo we know the PE engineering department could finish the YV RR into the national park. Perhaps the song writer was a member of the Pacific Railroaders Association. 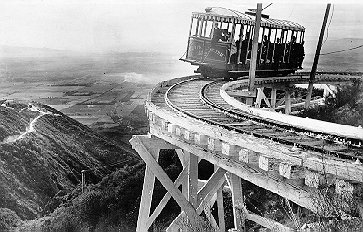 THE TROLLEY SONG
as sung by the Late Great Judy Garland
Hidden within the words to a song set in Saint Louis, Missouri, comes an interesting reference to the high alpine country around Yosemite National Park, in California. You have to make your own conclusions on why this entered into a song about a Trolley-Interurban ride in St. Louis. But here is a fascinating theory. The play was released just as the famous Yosemite Valley Railroad was facing abandonment. The railroad a long-time favorite of the rich and famous was used to effortlessly reach the remote park, forests, falls and lakes.

Just as the railroad was about to be sold for scrap, a young railroader named John Mc Fadden, of Los Angeles, stepped forward and examined the property. He was said to represent The Pacific Coast Railroading Association. The case could be brushed away except that the Southern Pacific, owners of the Pacific Electric Railroad, had their legal department file Mc Fadden's attempt to delay the abandonment. Nationwide announcements went out of a "Great new electric line to the park", would be built on the lines of the YV. California, saw this as a god-sent attempt by the Southern Pacific for a sub rosa buy out. As quickly as it was dreamed up, the concept and the backers vanished. The Yosemite Valley was scrapped in 1945, and California - indeed the nation, has been trying to put it back as a LRT line, ever since. coincidence? I don't think so.

The Yosemite Valley Railroad was on in it's last hours when the movie was released in 1944. The YV died in 1945, and within 20 years the electric railroad industry would pass into the history books and sleep for 40 years.


We're off on a "trolley" which is more likely an interurban car from the description in the song. The Clang, Clang, Clang, is from the "trolley gong" mounted under the floor or on the roof and usually operated with a small foot peddle. Contrary to Hollywood the Trolley would not sound the gong constantly and it is reserved for busy intersections or any area of caution. The Ding of the bell here represents the signal bell or buzzer to the motorman and conductor that someone wishes to stop at the next station.

Note that this is a young romance and her heartstrings are tense, and though the movie is set in St. Louis, Missouri, the Hollywood producers of that era thought that all the world was California. So in reality we have her headed for a mythical recreation place called Huntington Park. While the real Huntington Park name paid tribute to the massive Pacific Electric Railroad builder Henry Huntington.So there is a direct relation in the song to Southern California's great electric system.

Note that the Trolley doesn't bounce, rock or roll, it "glides" to Huntington Lake.
Once again the producers used the romance of California to impact the songs listeners. Anyone that has spent time near Yosemite, may indeed have spent some time at the 7,000 foot high Huntington Lake. This is an alpine paradise of unprecedented proportions. It's implication to the Trolley Song is that Trolleys deliver us to a place where the dreams we dare to dream, really do come true.

In the era of the electric streetcar, smog in all but the worst steel producing cities was all but unheard of. The air was clean and sweet, there is often a distinct smell of ozone around the electric motors and wires as well. This Trolley terminal wasn't even on a street, but somewhere where the honeysuckle grows. No doubt she found the lake, the alpine wilderness, the snow capped peaks and the electric way to the mountain as breathtaking. So much so she says she couldn't sing, squeak or speak. I've had that happen in the Yosemite Valley floor - the feeling that one can reach out and touch the face of God.

As she arrives in the mythical Lake garden, she rings the buzzer or bell and the big interurban pulls to a stop. Spotting her heartthrob, she can't speak, taken back by the beauty of this electric world, all she can think to do is fall - Maybe he'll pick her up?


With my high-starched collar, and my high-topped shoes
And my hair piled high upon my head
I went to lose a jolly hour on the Trolley and lost my heart instead.
With his light brown derby and his bright green tie
He was quite the handsomest of men
I started to yen, so I counted to ten the I counted to ten again

Here we get a glimpse of the romance in her head already set to this perfectly clean, pristine environment of electric railway - a celestial backdrop - and a beautiful young couple with springtime in their eyes. She certainly dressed for the occasion to knock the men off their feet with her high-starched collar and high topped shoes. She also dressed to do some manner of hiking, such as it was in those days. High topped shoes protect the delicate ankles from rocks and accidental twists and injury on mountain trails. Her hair was up and out of the way.

But note that she deliberately went just to spend a "Jolly Hour on the Trolley". Trolley excursions are a lost American past-time. Sadly, we are too much in a hurry to follow Judy and just go out and kill an hour for the sake of the wonderful ride. Frankly, most of us have never seen a Trolley much less ridden on one. I find this part of the song a bit modern-tragic.

Note the man of her yen was wearing a derby hat, and a tie, certainly the standard outdoor suit of the day. A time when self respecting men considered the them selves naked without a coat and tie. As recently as WWII, General Patton wrote up dozens of allied soldiers who would "dare to fight a war without a tie!" So we see from this they both boarded the trolley for a frolic.

Mostly a repeat of the first verses, this chorus changes the meaning somewhat, here we see that the trolley has reached the destination. The buzzer is going off constantly and the gong is clanging to clear the way of picnic basket carrying tourists.

She See's herself behaving as a trolley, certainly high on love she feels the electric surge as her heartstrings go zing, zing, zing. This time when she saw him she fell - but it was a fall of love at first sight. The motors are slowing the car as she feels a slight chug motion, the brakes are applied in a smooth rhythmic bump, bump motion. Her heart is again identified with the trolley as the air compressors kick in and she hears the rapid ka-thump - ka-thump - ka-thump under the floor. Just as the gentleman smiled the car shook to a stop.

He tipped his hat, and took a seat
He said he hoped he hadn't stepped upon my feet
He asked my name, I held my breath
I couldn't speak because he scared me half to death
Chug, chug, chug went the motor
Plop, plop, plop went the wheels
Stop, stop, stop went my heartstrings
As he started to go then I started to know how it feels
When the universe reels

Here the scene seems to change again, I believe the writer now was considering the tiny narrow gauge cars of the old Mount Lowe Railway. The Pacific Electrics narrow gauge alpine streetcars to Echo Park. Note the words he tipped his had, and said, "I hope I didn't step upon your feet." This was because the narrow gauge cars were a tight fit inside. Too young to know how to respond in words she felt she had arrived at the gates of the universe, but the Trolley is moving again and she didn't get off.


The day was bright, the air was sweet
The smell of honeysuckle charmed you off your feet
You tried to sing, but couldn't squeaks
In fact, you loved him so you couldn't even speak

The other passengers get caught up in the moment - Trolley - Young Love - Beautiful Girl - Handsome Man - Incredible scenery and sweet air.


Buzz, buzz, buzz went the buzzer
Plop, plop, plop went the wheels
Stop, stop, stop went my heartstrings
As he started to leave I took hold of his sleeve with my hand
And as if it were planned he stay on with me
And it was grand just to stand with his hand holding mine
To the end of the line.

The journey continues on forever, though neither planned it that way. It was just a lark on the trolley and a day in the park. It ended up being the quintessential Trolley Romance of all time. The two lovers now hand in hand decide they will take the car to the end of the line - where ever that may be.

And may it be that Judy and her love truly are spending the rest of time - to the end of the line - Somewhere over the rainbow.