This is What You Get Jacksonville ! Conclusion.

Yesterdays post just touched the tip of the iceberg of what it means for Jacksonville to become the railroad hub of Florida again. Today we'll add just a few more jobs that will pop-up around town as a result:

We don't need a building, and we need a new and larger convention center, wouldn't that be a win - win situation for our city? Just look at our grand old station, hub of nothing, when it could be the crown jewel of Florida Railroading once again.

Amazing the amount of fresh foods that go on board a train, this isn't your fathers 5 PM flight to Chicago, no, this could be the Dixie Flyer with a full menu and a full and well paid chef's staff.
Now multiply this by every train and crew that goes in and out of the city and it starts to add up fast.

A new cruise terminal at Mayport? Charter Buses full of happy passengers that originate at Jacksonville Union Station, move to the downtown hotels, shop in the central city, and cruise from our beaches. The only missing element is the train. Needless to say Amtrak, SunRail, Tampa Commuter Rail, and Jacksonville Commuter Rail are going to have to have a place to put those cars that are on lay-over or not in service for a few hours. Security? Clean Industry? Car Cleaners? When those trains come in from the North they are going to divide into two trains, each using a different route to South Florida. Trains coming in from the South will be combining into a single longer train for the trek North, no other railroad terminal in the United States is better located to lead the nation in train breakdown and makeup movements, including St. Louis, Chicago, New York, or Washington. This spells a host of new transportation jobs working 24/7 switching duties at our terminal. 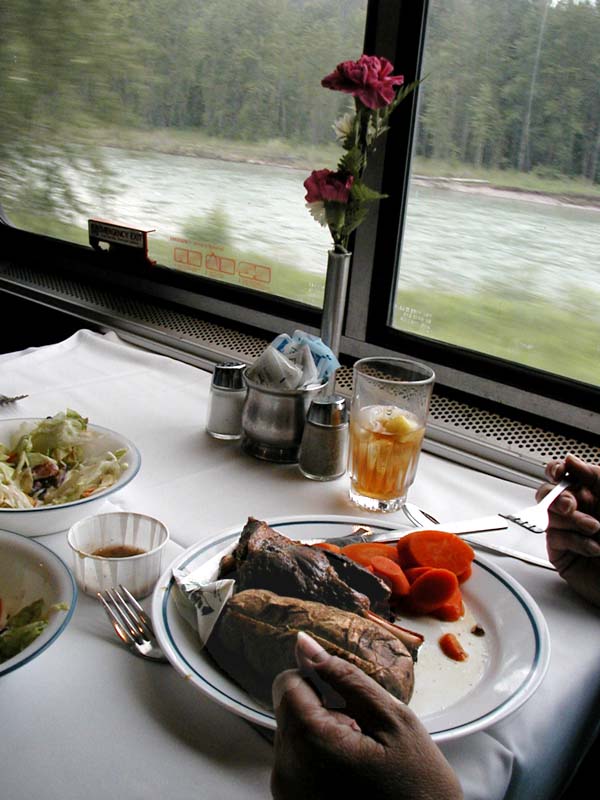 How many service industries are represented in this photo? Oh and by the way this isn't plastic airplane food either. Who raises those steaks in that dining car? Florida ranchers? Why not? Is that REAL FLORIDA sea salt? Anchor Hocking China? Flowers too? Yeah, and guess which state and wholesale markets lead in THAT industry? (uh, don't look too far).
"Our Restaurants Feature Changing Views", so said the Atlantic Coast Line brochure for tourism to Jacksonville and Florida in the early 1960's. Guess what? THEY STILL DO!
Who are these guys? Private Car Owners? What the? It's one of those if you have to ask, you probably can't afford one. Having a landscaped Private Car Track with full RV Type Services located next to our station (just as in the old days) guarantees us a steady flow of executive visits and charter trains from the NFL Games to the Who's Who of American Business Enterprise.

"Oh look Mildred, there goes the Private Car "Georgia"," just imagine that it is home based here. "Guess who's coming to dinner," indeed!
Did you know it REALLY IS? Along with a number of CSX, FEC, and private business cars hidden all around town. Just imagine if we could host them, board them and cater to them from the columns of that grand old terminal.

This is what a true railroad Terminal will get you Jacksonville. Sanford knows it, Orlando wants it, Tampa is watching, and we are fiddling away without leadership. How many military campaigns were lost by generals that got comfortable thinking they had everything they needed to be invincible? Oh hell Jacksonville, we don't even have a general.