What Did Bus Rapid Transit Do For Pittsburgh? 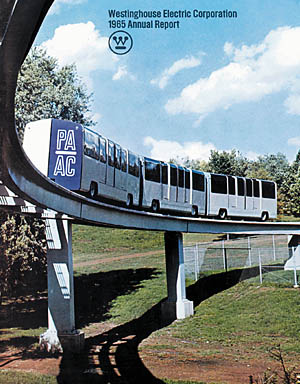 No one is saying that this is due to embracing Bus Rapid Transit, but they keep referring to mistakes made over the last 50 years. Turn back the pages and see what was the single biggest change in Pittsburgh Transportation. Granted the Steel Mills have closed or moved away. The industrial base is gone, but the new urban talk is of the successful remaking of Pittsburgh. A success? Yes, the City has held it's population better then most older "Rust Belt" industrial towns. It has remade it's image and emerged as the sparkling "new" city where the 3 Rivers meet. So in spite of the apologists theory's, I wouldn't lay this blame on population or business decline, tempting as that may be.
Finally, Pittsburgh Railways, the electric Trolley system has been reduced to rubble in those same 50 years. Once one of the most extensive electric railway systems in America, Pittsburgh started pioneering the "Sky Bus" and "bus ways" back in the early 1960's. Dozens of Trolley lines were torn out for what would become known as BUS RAPID TRANSIT or BRT. Sky Bus would go on to become a giant white elephant known as the Downtown Peoplemover. Frankly, people bailed off the system like rats from a sinking ship. When the "new trolley era started" under the banner of LRT or Light Rail Transit, Pittsburgh reluctantly Begin to cancel sky bus, the busway's, and save the remaining rail. In an attempt to convince the streetcar patrons that Pittsburgh had recreated itself with Light Rail, they decided to go with very expensive subways in the downtown. They moved the streetcars off of the surface streets, perhaps clinging to the flying bus as the technology of the future. Through all of this the fractured Super-Bus network kept on running. The new show piece for Mass Transit and darling of Detroit. Everyone predicted that the Rail Revival was just a temporary fad, a hiccup of distraction in the very few cities where it still held ground.
Here we are, 50 years into the New Trolley Era, and nearly 75 cities have returned to the rails. Very few bought into the BRT or Sky Bus like systems, a move that had to be disappointing to the bus industry. Finally the industry re-packaged it's image, copied Light Rail vehicle designs and features, and started making bus systems that were really more like a cafeteria of bus concepts. Bus Rapid Transit or BRT was born of this cafeteria, but no one can really define what "it" is. Being a collection of ideas that vary from city to city, no one is likely to nail down the definition either. Pittsburgh, is not a case of a rail beats bus argument, as that is a zero-sum gain. It is clearly a case of horrible misjudgement in what the public wants and will use.
Industry pundits will be asking "What did Bus Rapid Transit Do For Pittsburgh". The answer is likely to be very negative, and THAT will be a tragedy of monumental proportions. BRT and LRT should be complimentary, with the smaller vehicles (Bus) feeding the larger system (Rail) from the suburbs. A function of vehicle capacities, speed, flexibility and ease of capacity expansion. Forcing a bus to be a train might seem to be a great idea to some. Sadly, it didn't turn out that way in Pittsburgh, and it won't in Jacksonville either.
Pittsburgh Officials Blame Longtime Errors for Transit's Peril

In a 10-year period, Port Authority of Allegheny County lost nearly 5 million riders -- yet operated 78 more buses a day. The agency's expenses climbed during the same period by 64 percent -- or nearly $130 million, according to Federal Transit Administration data from 1996-2006, the most recent available. The numbers capsulize the problems driving the mass transit agency toward turmoil, as it reaches a virtual stalemate with its drivers' union on how to cut labor costs in a contract that would start July 1।
Recent efforts to generate more fare revenue and cut costs by slashing routes and trimming management benefits were not enough. "If we keep doing for the next 10 years what we did for the last 10 years, we're going to hit the wall," said authority CEO Steve Bland, who was hired in May 2006 to help fix the agency's problems। "It would appear through the mid-1990s that service was just sort of added. It was sort of the concept of, 'If we run it, they will come.'
"That wasn't the case। We have to be more strategic."
About 9 percent of the county's 1.2 million residents, or 110,000 people, use public transit. Without the system, low-income residents lacking vehicles would be stranded and commuter routes to Downtown businesses would become congested by cars, transit advocates say.
Posted by Bob at 12:15:00 PM No comments: Links to this post