I would like if I may to take you on a strange journey.
It seemed a fairly ordinary night when 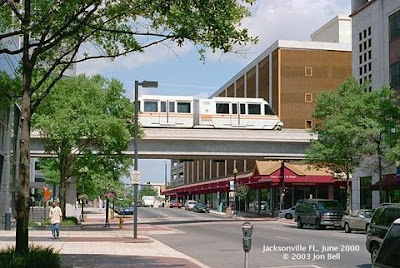 As we leave the bridge, we are quite low to the ground to duck under the on ramps for the auto portion of the bridge, then we quickly rise and pass over Bay Street. Here we clatter through the metal moving beam switches of the Skyway maintenance, Brooklyn and Riverside Avenue line. As we are on what is today considered the mainline of the Skyway, there is another 6 car train waiting for us to pass so it can follow us off the Riverside line. We ourselves continue to roll toward Central Station as we turn back east into the Central Business District.
Central Station received a complete remake and today functions as much a part of the Omni Hotel and Parking Garage or CSX Tower Two as it does a commuter station. It certainly still forms a major transfer point with the people headed for Bay Street Station, Jacksonville Terminal and Transportation Center, Brooklyn - Riverside, or Hemming Plaza, Rosa Parks, FCCJ, or Shand's Medical Center. The new 3Rd floor deck of the Station has a large balcony that rings the second floor boarding platforms, a quick trip up the elevator or escalator takes on inside the aforementioned buildings and all the sundry small businesses that have sprouted in that new balcony-skywalk section that ties it all together.
Pulling away on the East Line our train continues above Bay Street to the unique Laura Street Station that is modeled after a Chicago EL Train from a 1935 movie. This mostly steel station vaults the entire intersection of Laura and Bay, with entry's to the Modis and Bank of America Buildings on the lower levels and all under a roof. I think this inspiration came from the rebuilding and beautification that the city did on the Laura Strip back when the prohibition of parking meters went into effect.
When we proceed we pass another train inbound from the East Side of downtown and at this early hour, it would appear that it carry's just as many passengers as mine started out with. We roll into the Newnan Station next to the Convention Center and the new InterContinental Hotel, which along with the Convention Center extend out and cover all of the old municipal or county property's along Bay. Newnan is the station where the streetcars come up from Water Street, much to the delight of the hotel and convention crowd on their way out to the fairgrounds, ball parks or historic Springfield. It's also possible to catch the streetcar here that loops back past the glass and steel county courthouse that finally got completed by a new mayor a couple of years ago. While my jury's still out on my feelings about it, the mayor did say he was going to change the design and complete it, something he did in record time. With that outside steel frame and black and silver metal work it stands like a giant on that edge of the business district. But to me it still looks like something from the set of the famous movie "Metropolis," or what I 'd call "a nightmare in an Erector Set".
Catherine Street Station is in the midst of the new downtown focal point. For it's here in a site once dominated by a JSO Police Station and Jail that a new version of a long ago proposed building called the St. John is topping out at 76 floors. Destined to be the crown jewel of Jacksonville, the Skyway even jogs through the future hotel portion of the building with a station that is going to look like something out of a Disney Space Movie set. In fact two stations on this newer extension have taken on these maverick proportions. Now that The long awaited "Shipyards" trio of towers has finally been built near the foot of A. Phillip Randolph Boulevard, it's a journey that must be experienced to be believed. On entering the Shipyards the Skyway rolls past an open door with air jets that keep the building climate controlled. Once past the jets one is suddenly plunged into the sea. Incredible as this may seem the new aquarium complex was worked into the Hotel portion of the Shipyards and our train pierces through the living sea within a glass tube. After the station, which is built so that passengers can pass onto a beautiful New Orleans Style balcony or down spiral stairs or elevator to street level where the Randolph-Gateway Mall streetcar line ends. It is going to be interesting to see how the future St. Johns building beats this for pure appeal but that is exactly what they claim they are going to do.

The darkness must go
Down the river of nights dreaming
Flow morphia slow
Let the sun and light come streaming Into my life.

Alas it's the end of my ride, the train pulls out for the anticipated crowds of commuters parked around the Municipal Stadium, but I can't see them, my vision is getting blured. I go out on The Shipyards balcony for a cappuccino. I'll sit and try to watch while I catch up on my rest. How I'd love to see the streetcar pull into this station this morning but my clock is ringing on the table. Oh God, REALITY! Just a tired old used up transportation planner and civic activist in a common sense yet delusional dream. Time to wake up and shake the dust off, there are critical decisions to be made this morning. Do I gird myself up for a mind numbing breakfast of Rebel Yell? Do I choose Southern Comfort? Do I dress for another day of warfare against Meso-proterozoic Municipal Morons, Cretaceous–Tertiary Transit Dinosaurs, and plenty of Pleistocene Planners. I was simply having the most pleasant dream of the Jacksonville that "could - be." Now I'm disgusted that I've awakened to the reality of 2009 and the sorry state our city and our country is in. Damn them all. Worse still, I don't even own an Avanti!
It's all over
Your mission is a failure.
Your life style's too extreme.
I'm your new Commander.
You are now my prisoner.
We return to Transylvania
Prepare the transit beam.
Comic excerpts from "The Rocky Horror Picture Show" (A Jacksonville Skyway Reality)
Posted by Bob at 6:19:00 PM No comments: Links to this post