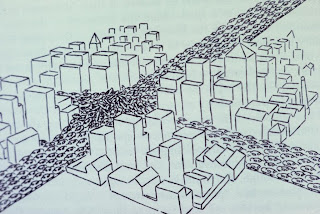 The City of Jacksonville received top honors from the Florida Chapter of the American Planning Association (APA) for its 2030 Mobility Plan. The APA’s Executive Committee will present the city with the Award of Excellence in the Best Practices category at an awards ceremony in Palm Beach.

The 2030 Mobility Plan is an innovative response to the 2009 revisions to Florida’s Growth Management laws. It is a long-range plan that links land use and transportation, establishing a tiered mobility fee system. The Plan establishes acceptable levels of service for transportation on city roadways, sidewalks, railways and bike paths.

The plan actually reduces the cost of new development compared to the old system, and it guides development toward infill projects where little or no fee would be assessed.

The plan is about a fair "concurrency" system, and integrating transportation and land use development for fiscally sustainable growth patterns.  The mobility fee serves as the funding source to implement these concepts.  With Jacksonville's revenue sources shrinking every year, the mobility fee provides the city with a fair path to invest in itself, stimulating job creation, quality of life enhancements, and economic growth in the process.

HOW DOES IT WORK?

First the cost of vehicle miles traveled (VMT) was calculated which we'll call item 'A'. Step two was time consuming, but it ascertained the typical VMT within each of mobility district, item 'B'. Finally the projected daily vehicle trips generated by the new development project 'C' are calculated, the equation looks like this: 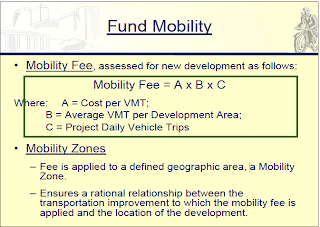 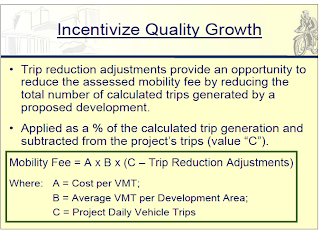 INSANITY: Doing the same thing
over and over again and expecting
different results.

Jacksonville is one of the nation's leaders in market rate multifamily construction, infill continues in Riverside and more development pops up around St. Johns Town Center and River City Marketplace every day. But these market rate economic positives are not enough for some, especially when the public could be hoodwinked into paying for developer created sprawl.

The North Florida Builders Association has 'worked with' city councilman Richard Clark to have the citizens of the city pay for all infrastructure improvements effectively subsidizing developers from the public purse.  Despite community opposition, Councilman Richard Clark has filed a bill in favor of the City of Jacksonville implementing a 3-year tax increase in the form of a mobility fee moratorium.

Lobbyists have been hired, and false claims and accusations are flying hot and heavy. One councilman claiming during the first moratorium we only lost $3 Million dollars that could have gone to improvements, but he added you can't do anything with $3 million. What he didn't say is those waivers have now past the $5 million dollar mark, and will likely top out somewhere around $27 million dollars. Ah, but what can be done with just $27 million?

They have claimed the Mobility Fee is just to fund a couple of bike trails, and that the entire fee would be consumed by just 3 projects. None of which is true. 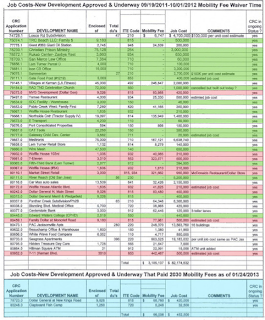 OVER THE CUCKOO'S NEST

What they didn't say to our 19 member city council is that a full 40% of the projects the builders association has identified as 'endangered' by the fee wouldn't need to pay a dime, but it appears our politicians are drinking the cool aid. It also appears that the fear tactics may have fooled Television NEWS 4 by this slight of hand. The builders are asking us for a 30 million dollar a year tax increase, and that increase is only going to grow.

Ennis Davis (co-author of the Mobility Plan) recently said "A full blown moratorium that basically subsidizes nationwide expansions of 7-11, Waffle House, and Family Dollar. Our overall annual city budget hovers around $2 billion.  How on earth can it make sense in anyone's view that a company which enjoyed $77 billion in sales globally last year can't open in Jacksonville because we require them to cover their negative impact." Jacksonville isn't so big or so important that we will suddenly attracts hundreds of new businesses because of a token discount on our dirt, but you can bet if we looked more like Palm Beach and less like Philips Highway we'd have the luxury of picking and choosing.

Absolutely any national company desiring to locate in Jacksonville has already got a line item in their expansion plans to cover any 'impact fees'.

CLOKED AS A FEE

Imagine the moratorium passes for 3 more years, and imagine during that amount of time we get no more or no less waivers of the mobility fee then the total amount of waivers during the first year 'trial moratorium.'  This is how it cooks down:

SPECIAL THANKS TO:
metrojacksonville.com
Mr. Ennis Davis
Mr. Bill Killingsworth
Posted by Bob at 9:33:00 PM 1 comment: Links to this post

19 Flew Over the Cuckoo's Nest