Take A Tour Of The Port Of Gold - JAXPORT

So just where on earth is this "Port of Gold?"

Q. What if God created an East Coast - Atlantic port so far west that it was under Cincinnati?
A. He did, and it's called JAXPORT.
Hope you enjoy this photo tour of our booming waterfront. 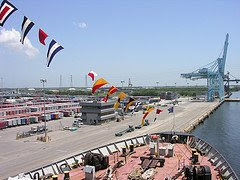 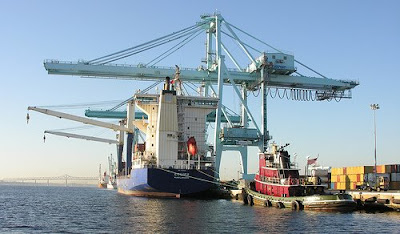 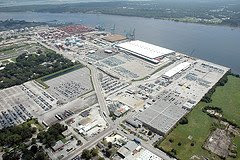 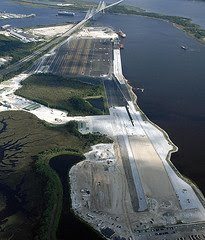 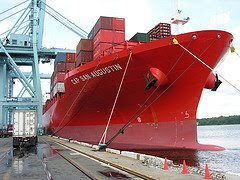 international shipping
Posted by Bob at 5:57:00 PM No comments:

Malarkey From The Mayor

Beware the Boy Mayor bearing gifts... Beware Indeed!
When it comes to progressive thought - go to Tampa. Jacksonville, been held hostage by a Mayor that is deeply rooted in both Oil and Concrete. The man is heir apparent to his fathers fortune as the head of Gate Petroleum and Gate Concrete Products. When he took office 6 years ago, he looked like the all American business man from the big city. What we got was 6 years of misguided leadership and an acute inability to capitalize on myriad opportunities.
When the news hit that Mayor John Peyton, wanted to finish the port expansion as a job inducing economic package, things didn't sound so bad. Then we all saw the details. Horrid.
Indeed Peyton and Company want to raid the City's Jacksonville Transportation Authority of it's sole dedicated funding source. Currently JTA enjoys the benefit of knowing that it will receive 1/2 cent from every sales dollar in the County-City.
Under the Peyton scheme, the Better Jacksonville Plan, a massive infrastructure improvement program started under previous mayor Delaney, would see some projects shelved until 2019. Worse, the BJP called for a $100 Million dollar set aside for mass transit right-of-way. Apparently it wasn't for anything more as no one in City Government understood there were far cheaper modes then a $26 Million dollar a mile BRT project. The "Just like rail only Cheaper," mantra had taken hold at the City Hall on Duval Street. Everyone just "knew" that rail or LRT would be far more expensive then our 25 odd mile BRT system.
Peyton shut down those voices of descent and is now after another $100 Million dollar set aside, this time, for massive highway projects in the Port of Gold. Refusal to meet with anyone with a more rail-centric point of view, he is now hard at work convincing the city council that the highway program is the quickest route to more jobs.
How this will effect our Light Rail/Streetcar and Commuter Rail Studies is yet to be seen, but it doesn't bode well for any transit at a time when JTA is all about becoming regional.
The end of the Peyton Plan will be to cut JTA back to beggar status. Bus improvements which are long overdue and sorely needed are going to be trashed. Schedules will be slashed and some runs will be discontinued. The stepchild of the City, our many-million-dollar monorail, called the Jacksonville Skyway, is going to linger and fade as promised extensions and betterment's are buried under the pavement. Their $100 Million will be spent on land deals that will cashier into collateral for BRT grants, for a bus system without funds.
Finally, the result will be a fist full of new roadways at JaxPort. Big, wide Florida type roads, to move trucks that burn lots of diesel fuel. The railroads are going to be left to fend for themselves to get Port access to the new Trans Pacific TRI-PAC terminals. Already the Zoo Parkway at JaxPort is perhaps the prettiest road in North Florida, and why not? It serves as an address for the Gate Corporation.
For the complete news article click:
http://www.jacksonville.com/tu-online/stories/120208/met_362515013.shtml
Better Jacksonville Plan transportation projects to travel more slowly
Cash isn't coming in as quickly, so work can't move as quickly
By DAVID HUNT, The Times-Union
Better Jacksonville Plan transportation projects likely will be delayed as the city tries to make a legislative detour around a financial roadblock
A gasoline tax set to expire in eight years might be extended until 2039 to help drum up cash. Peyton also is asking Jacksonville Transportation Authority to restructure an agreement that has had the JTA collecting revenues from a half-cent sales tax that's been on the books for two decades.
City officials think both moves would help finance $50 million in ongoing Better Jacksonville projects. That announcement was coupled with Peyton's call for the city to finance another $50 million in new spending to help move heavy trucks in and out of Jacksonville's growing deepwater cargo ports.
Together, the projects were sold as a $100 million stimulus...
The city wants to restructure how much JTA gets from a half-cent sales tax that replaced Jacksonville's toll-booth revenue in 1988, money that has been used for the authority's operating expenses and road projects. The City Council also will be asked to extend through 2039 a 6-cents-a-gallon gasoline tax that was set to expire in 2016.
Peyton credited the Better Jacksonville Plan with generating more than $1 billion in regional economic impact since its inception. Around $250 million in road projects should finish on schedule, he said. Monday's issue was finding a way to get the remaining 17 road projects out of the conceptual phase.
Peyton said keeping the Better Jacksonville Plan moving is critical to the region's economy because the projects provide construction jobs. City Council President Ronnie Fussell agreed.
"We can't stop," Fussell said. "These jobs are tied to keeping the majority of households alive."
Too many original Better Jacksonville road projects were trimmed during a revisit of the plan in 2005 to think about further cuts, Peyton said.
The Executive Director of the Jacksonville Transportation Authority, Michael Blaylock, says he's on board to help the city. "Everybody is hunkering down", he said as many in the crowd wondered why he would sign off on the impending Transit crisis this will create.
Blaylock's dilemma is easy to understand when one recognises the folly of being one of a handful of cities on earth with a highway agency operating and planning our mass transit. Thus the name of this Blog, Jacksonville Transit, "as-if" we were smart enough to split off the highway boys from the strap hangers. Fat chance if this is rubber stamped by the City Council early next year. Peyton is marching our city into it's very own, modern day, Permian-Triassic extinction.