COMMUTER RAIL STARTER LINES ARE CLOSER THEN EVER! 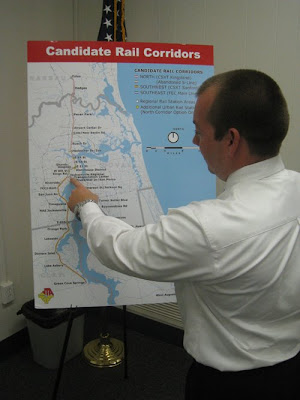 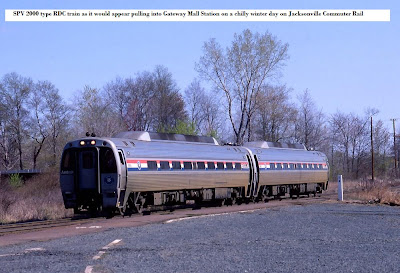 Two car SPV2000 train of Jacksonville Commuter Rail, as it would appear pulling into Gateway Mall station from the Southeast on a cold winter day. 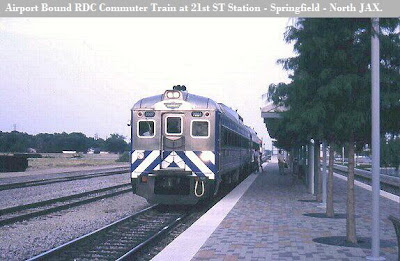 Another scene, looking South toward the Arena, this Northbound Commuter Train of twin RDC units, is about to leave Springfield Yard, at the 21st Street Station for the Airport. Swisher International, Florida Rock Industries, and the Talleyrand Docks and Terminals are all just a few steps away.

An excellent piece appeared on our new Commuter Rail lines in this issue of the Jacksonville DAILY RECORD. It never ceases to amaze me how well our smaller newspapers do in reporting these events, while the regional paper seems to grope for details and accuracy.
Something not really addressed by the article is that a starter line such as downtown to the Airport or to Gateway Mall could be self financed by the City of Jacksonville. It would involve a change of rules for the Better Jacksonville Plan Transportation Set-Aside Monies, but it COULD be done with a bit of will power. If so we could have Commuter Rail up and running before any other Florida Metropolitan Area can get their paper work filed with the FTA.
Article reprints available.Find out more.
11/05/2008
by David Chapman
Staff Writer
The North Florida Transportation Planning Organization (TPO) held its quarterly Business, Industry and Government (B.I.G) roundtable discussion meeting Wednesday, highlighted by a presentation discussing commuter rail and how it’s on track to go to the next step.
James Boyle, project manager for the Jacksonville Transportation Authority, discussed the feasibility study and the process of what has been accomplished on the issue.
“People have been very responsive, very interested about commuter rail,” said Boyle.
Boyle and JTA began the $400,000 feasibility study by first looking at existing railroad lines within the nine county region, then reduced the area to 20–30 miles from Downtown Jacksonville, with the Osborn Convention Center turning into a central hub.
Whittled down into a Northern line (Downtown to Yulee), Southwest line (Downtown through Green Cove Springs) and Southeast line (Downtown to St. Augustine), the feasibility study then looked at preliminary operating plans of each.
The study showed how many miles of each track would need to be repaired in order to be operable, along with early three-corridor combined statistics including rail lengths (ranging from 22.8– 38.4 miles), stops (from 10–15), travel time (37–51 minutes), average speed (32–46 mph) and ridership (770– 4810 people a day), all 2015 target figures.
An early, “moving target” cost, according to Boyle, is $543 million for the 91.5 - mile, 3 - corridors system, but the estimate is preliminary and will be influenced by things such as potential agreements with the railroad companies, additional track building where only single lines exist, signal improvements and type of rail cars purchased.
The key to these particular corridors working, said Boyle, is the use of existing lines. Building completely new lines to areas such as the Beaches would be cost prohibitive at this point.
A central transportation hub being located Downtown is something Boyle believes will attract new business.
“Something like this I think could help attract people to Downtown a lot,” he said. “Especially for developers.”
Funding is the big issue, said Boyle, but further studies on each corridor will help. Additionally, each corridor can be built piece by piece, stop by stop – so the costs aren’t all needed up front.
After putting the final touches on the study, Boyle and JTA will begin making further rounds to different agencies to share continuing results until an alternative analysis study can be done.
“Every time it gets mentioned, people get excited,” said Boyle.
Also discussed during the North Florida TPO B.I.G. Roundtable on Tuesday:
• North Florida TPO’s Wanda Forrest gave the group an update on the organization’s efforts and steps to become part of the Clean Cities, a government-industry partnership designed to reduce petroleum consumption by promoting alternative fuels. Forrest said the hope is to have the first planned meeting on the topic in January, but the organization is still searching for more stakeholders in various fields who are needed to complete the stakeholder process. Currently, the local effort has resulted in 120–125 stakeholders, according to North Florida TPO, but more stakeholders are needed. Some fields include health and transportation departments, commercial fleets, transit agencies and nonprofit organizations. For more information on Clean Cities, go to www. northfloridatpo.com.
• Jeff Sheffield, North Florida TPO planning director, gave updates on Port infrastructure improvements on the Northside. “We’re trying to figure out what we can do now,” said Sheffield. “There is a lot going on.” Some of the discussed projects include Alta Drive improvements, changes to the Zoo Parkway at the Port entrance (near the future Hanjin Container Terminal) and improvements at State Road 9A and Pulaski Road. All are considered short-term improvement projects with a goal of 2011 completion. “There is still time to do all these,” said Sheffield.