ANOTHER DAY - ANOTHER AIRLINE 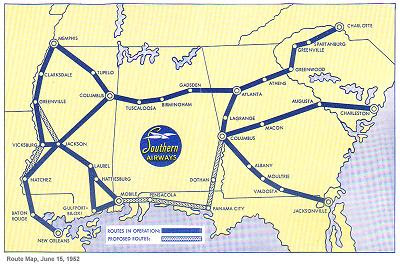 Southern Airways 1952
We have lost another airline folks, this time it's the "mighty Northwest" that was eaten by Delta. While I had much rather fly a number of smaller regional carriers then throw my loyalty to a single giant, we have to hope the employees of both will be well cared for. For the nostalgic about air travel, you may recall the worlds largest airline merger when NORTHWEST took control of REPUBLIC. Republic it's self was a product of the old lovable SOUTHERN AIRWAYS and NORTH CENTRAL merger, a sad day in Dixie indeed.

Here is the news release, and lets all hope that the employees and their families are well cared for in every aspect of this newest "Worlds Largest Airline".

Officials surprised at ease of airline merger
Times News Service
Officials at MBS International Airport say they're a bit surprised Delta Air Lines completed its $2.8 billion acquisition of Northwest Airlines without much turbulence.
Now, they're hoping for a smooth transition, including no decreased flights at the Freeland airstrip.
"I was just talking with (Northwest Manager of Customer Service) Rich Bostwick about how I thought the merger would become final by December," said Jeff Nagel, MBS manager.
"I'm very impressed with how Delta went about the whole process."
Two of America's most well-known carriers became the world's biggest last week. The Justice Department said it had no antitrust objections.
The company will keep Delta's name, Atlanta headquarters and Chief Executive Richard Anderson, who once ran Northwest.
Delta executives said travelers will see no differences right away. New uniforms will appear in the next year, and Northwest fleet's signature red tails will get a new logo over the next two years.
Consumer advocates believe the proposed merger won't bode well for travelers in the long run.
Antitrust regulators are downplaying those worries and in a statement wrote "the proposed merger between Delta and Northwest is likely to produce substantial and credible efficiencies that will benefit U.S. consumers and is not likely to substantially lessen competition."
Rick Seaney, chief executive of Dallas-based FareCompare.com, which tracks changes in airline ticket prices, disagrees.
While it's true that Delta and Northwest flights didn't directly go head to head with each other, "the reality is you have one less airline across the U.S. to drive down prices and that's never a good thing for consumers," he said.
"Prices are going to take a hit and in the northbound direction," Seaney said.
Nagel, meanwhile, said it's too soon to determine what to expect by way of the number of flights at MBS as Delta absorbs Northwest.
"We don't know what's going to happen," he said.
For the past five years, Northwest has maintained seven daily flights in and out of Freeland.
MBS' other carrier, United Express, has planes leaving four times daily.
"As the two airlines become fully integrated, we'll learn more," Nagel said.
Much is at stake: The travel hub handles 400,000 passengers annually. This year's head count of 237,412 through September is a 10-percent drop compared to the same period last year.
In September, MBS leaders unveiled designs for a proposed $48 million terminal that stresses conservation and Saginaw Valley's heritage.
Jacksonville, Fla., aviation architectural firm Reynolds Smith & Hills Inc. will handle the work.
The 75,000-square-foot terminal will feature a steel-and-glass construction that relies heavily on natural lighting to reduce the need for electricity. White pine accents and other wood trim are meant to pay homage to Saginaw's lumbering lore.