BRT EVERYONE CAN LOVE! 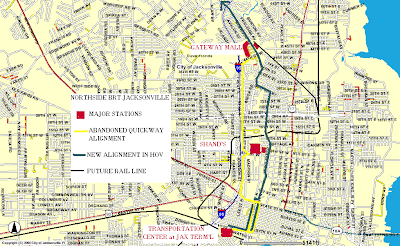 Bus Rapid Transit is on it's way, not the $26 Million Dollar a mile version either, rather a system called Light-Rail-Lite. Please understand that this whole project has been something short of a local war.

Initial route alignment had JTA building a "super-bus" freeway right along Interstate 95 (the main N-S route on the East Coast) from downtown to the Gateway Mall. At Gateway, the BRT line would meet regular city buses for the Northwest side of town. Northwest Jacksonville is by far the most transit dependent segment of the City. Yet NOBODY lives on I-95. So with all the money, concrete, steel and time involved, we were looking at one short leg of a 4 legged - BILLION DOLLAR BUS.

After thousands of articles, here and elsewhere, after explaining our need for rail as our primary trunk system, and BRT as our primary feeder, it would seem the message is finally sinking in. The system now proposed is a much less involved build. No 30 year wait to ride the buses either. Using surface streets - and better yet a main artery that is little used but connects the whole city, JTA has hit on the formula for BRT success. HOV lanes, Lem Turner Road, Shand's hospital and future commuter rail all out of the box on about the same date. Run Jacksonville RUN! Scott, Suraya, Please take a bow.

A vision for the future of Downtown transit including city buses feeding trolley routes to reduce congestion on city streets has moved another step closer to reality.
The Federal Transportation Administration (FTA) and Jacksonville Transportation Authority (JTA) are planning improvements to the local public system and Phase One of the Jacksonville Rapid Transit System has received approval from the U.S. Environmental Protection Agency. JTA will soon be requesting bids for the design of the improvements.
“It’s an important first step to get this rapid transit system started,” said Scott Clem, director of strategic planning for JTA. “It’s also a step toward having a multi-modal transportation system in Jacksonville and Northeast Florida.”
The JTA plans to have the final design for Phase One by the end of 2009 and complete construction by the end of 2010.
“Our goal is to have this phase and the Jacksonville Regional Transit Center (JRTC) opened at the same time,” said Clem.
The JRTC is planned to be built across the street from the Osborn Center on the north side of the exisitng Skyway terminal. The center will include Greyhound and JTA bus terminals, Skyway access and an Amtrak terminal.
The $15.5 million Phase One project will include dedicated bus lanes along Broad and Jefferson streets, installation of transit signal priority equipment on bus routes and real-time bus schedule information supplied through GPS systems.
Transit signal priority systems utilize equipment on buses and traffic signals that will detect when a bus is at a stop near a traffic signal and, if the light is green, will prolong the green light to allow the bus to get through the intersection. The GPS equipment will provide transit customers with arrival and departure times for buses at each stop.
Phase One moved into the design phase after receiving approval from the U.S. Environmental Protection Agency after the project underwent an environmental assessment, which is required by the National Environmental Policy Act of 1969. Factors analyzed during the assessment include social, economic, environmental and transportation issues.
Each analyzed factor was then further broken down. The social and economic factors considered included neighborhood/community impacts, cultural resources, economic impacts, environmental justice and property impacts. Environmental factors included air quality, noise and vibration, hazardous material sites, water resources, parks and historical sites.
Traffic, parking, transit operations and ridership and construction impacts were the transportation factors analyzed.
After all factors were reviewed, a finding of no significant impact was submitted to the EPA, reviewed and approved.
Just like the trolleys rolling through Downtown, the Jacksonville Rapid Transit System is moving right along and the next phase of the project is underway.
As the design phase on the Downtown project begins, a public hearing will be held to discuss the North Corridor project. An environmental assessment is being conducted by JTA to determine the type of transportation improvements needed north of Downtown.
The 10.5-mile corridor stretches from Downtown along Boulevard Street to Gateway Mall and continues north along Norwood Avenue/Lem Turner Road, ending south of Armsdale Road near I-295.
The first public meeting to discuss the project was held Monday. Another public meeting will be held from 6-7:30 p.m. on Nov. 17 at Florida Community College at Jacksonville North Campus in the room C-126 auditorium. The public meetings have helped JTA find out what the public thinks about the planned improvements.
“We’ve had a mixed response to the rapid transit system project,” said Suraya Teeple, JTA transportation planning manager. “Some people are concerned that some of the connections won’t be made, but this is the first phase, so right now we are working on educating the public on what they can expect from the new system.”