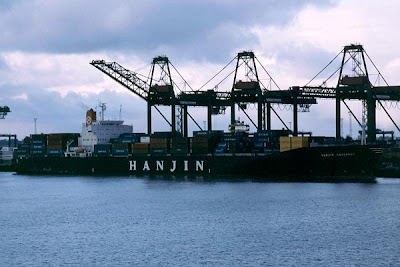 Today we have more then one reason to celebrate in Jacksonville. FIRST HAPPY VETERANS DAY TO ALL COMPATRIOTS. Secondly, there is the new shipping line. Nothing big mind you, just one of the largest companies on earth! JAXPORT and the City of Jacksonville have inked the deal this morning. Hanjin with 50 worldwide terminals is building their first "home" in the USA in Jacksonville. Following right behind them will be COSCO, K-LINE, YING MING.

An International company has sealed a deal with Jaxport today.
The board of directors at Hanjin approved the terms and conditions of the deal at their quarterly meeting today.

Here is the statement from Jaxport and Mayor John Peyton:
Mayor John Peyton and Jacksonville Port Authority officials are pleased to announce that the Board of Directors of Hanjin Shipping Company of Seoul, Korea today approved a 30-year lease agreement with JAXPORT. The lease calls for Hanjin to build an approximately 90-acre container facility at the Dames Point Marine Terminal in North Jacksonville with the option for further expansion. The $300 million Hanjin Container Terminal at Dames Point is expected to open for business in late 2011 and will be a key hub operation for Hanjin's east coast port activity. JAXPORT's Board of Directors approved the lease offer earlier this month.The new agreement is expected to create more than 5,600 new private sector jobs in Jacksonville and support operations such as trucking, distribution and related services. The new terminal will generate nearly $1 billion in annual economic impact."In this difficult economic time, I am tremendously proud that we are able to bring these well-paying jobs to our community," said Mayor Peyton. "As the United States continues to see increases in container traffic from Asia, Jacksonville is poised to play an even greater role in the global trade market. This commitment from Hanjin, one of the largest shipping companies in the world, illustrates Jacksonville's growing importance in the international marketplace. Companies such as Hanjin are taking note of the benefits of doing business at JAXPORT which will translate into even more job opportunities for our residents."Construction of JAXPORT's Hanjin Container Terminal is expected take approximately 24 months, following the permitting process. The new terminal will be located adjacent to the nearly completed TraPac Container Terminal at Dames Point being built for Tokyo-based Mitsui OSK Lines. The TraPac Container Terminal will open for business in January 2009."This is the one-two punch we have been working toward," said JAXPORT's Executive Director Rick Ferrin. "TraPac put us on the map. Hanjin makes JAXPORT a major player in Asian and European trade and together the new terminals help fulfill our mission of bringing jobs and opportunity to the region."Hanjin is Korea's largest, and one of the world's largest, container carriers, moving more than 100 million tons of cargo annually and operating in more than 50 countries. In the U.S., Hanjin's subsidiary, Total Terminal International, presently runs dedicated terminal operations in Seattle, Long Beach and Oakland. The proposed Hanjin Container Terminal will be Hanjin's first dedicated U.S. operation outside the west coast, a strategic move meant to capitalize on the expansion of the Panama Canal and the anticipated increase in container traffic along the east coast.