Downtown Maitland Florida, before Sunrail, we have to be reminded of where the downtown and railroad station were. One of the highest dollar residential area's North of Orlando, it's easy to see the center of the town no longer plays a major role in the midst of miles of planned communities. If Sunrail is to cause development to happen, it will be in downtown Maitland, Lake Mary, Longwood, Altamonte Springs, Etc.. If Sunrail can bring the development back to it's historic center, ending sprawl, I say, "Bring it on."

Does that term send nightmare visions of Los Angeles type sprawl extending for endless miles caused by a railroad? If not, your not getting the message that is being sold by the supporters of Florida High Speed Rail. They want us all to believe that the recent deal with CSX for Orlando's long awaited Commuter "SUNRAIL" Project will promote sprawl, with virtually no riders. The claim has been that somehow Sunrail is a secret deal with developers. Let's look at those claims based on some easy facts.

Sure the Sunrail line WILL spur more development, there are already plans as well as construction all along the route.

BINGO, Along it, not 5 miles away from it. Commuter Rail creates dense concentrations of urban life centered around stations. Commuter Rail development will include urban, in town type Publix, Walmart, and such, but rarely if ever does it cause auto dependent plaza style sprawl in outlaying area's. The reason for this is found in the very concept itself, by nature Commuter Rail allows one to PARK the family gas guzzler, and ride. Commuter Rail certainly doesn't encourage more automobile use.

The people who live in auto dependent suburban areas, will no longer have to crowd the lone Interstate. Their trips will have the option of being greatly shortened and in many cases eliminated. Autos will pour out of the suburban tracts and into park and ride lots where their owners will take the train.

Without those automobiles people must stay centered on the stations or the concept of centrally located mass transit. Any developers who ignore this unwritten rule of nearness, will fail. Trust me, developers will follow Sunrail, but they are smart enough to realize every mile from the station equals less and less sales.

Typical Commuter Rail downtown revival in Layton City, Utah, Note where the development is taking place. In addition to the new Station, Utah DOT is also doing a study for a proposed Interchange that would be built near the Station. Layton City has designated the area as a Redevelopment Project Area and is focusing on bringing new business to the area and revitalizing existing infrastructure. There is a lot of interest in Old Downtown and the area is poised to become a major attraction along the Commuter Rail Line.

Commuter rail will force Florida into one more revelation, in Orlando or in Jacksonville, wherever we add connections, the state is about to discover that hourly bus operations are not service, they are mere accommodations. Just one more urbanest change that is headed our way like an oncoming train.

The Sunrail Train will run from Downtown to Downtown, just like Amtrak

A good friend recently listed reasons NOT to live on the Central Florida Corridor today:

Will Sunrail make this worse? Not a chance. These homes aren't going to go away, and their communities long past the rural stage are suffering from the inside out. The more central one locates in these cities, the worse the transportation dilemma and maze becomes. So the older builds are all in the "downtown's," and the newer homes and shops just keep piling on the parameter. The downtown area's become less functional with each new band of outlaying development.

The premise that Sunrail will encourage more of such irresponsible development is completely false. Sunrail will run on the CSX tracks, and what is today's CSX Railroad, was there over 100 years ago. What this means to the communities on line is anywhere there is a downtown, there and only there, will one find the train. So since it will focus all eyes back on the city centers, all Sunrail development will be in the sectors that have long been ignored and even become blighted. Sunrail won't cause Sprawl, in fact when that 5:00 o:clock whistle blows, those trains will stand ready to take you home, to the DOWNTOWN of your choice. 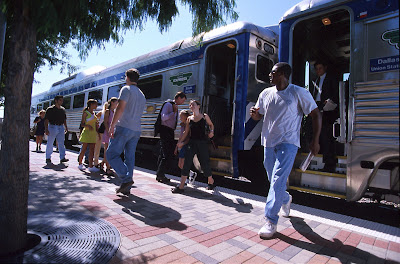 The Orlando CSX deal, will make this dream a reality for not just Central Florida, but for Tampa, and best of all, Jacksonville. This scene in Dallas, shows their remanfactured RDC cars in action, roumor has it they have made contact with us for these very cars.

In the next article, we shall examine a true ill conceived "Sprawl Rail Plan," one so bad that it can only lead to disaster. Taking the negatives and blaming them on Sunrail is a smoke screen, so tune in as we tackle, "Why Florida's High Speed Rail Plan is an Oncoming Train Wreck."