THE TRIUMPHANT RETURN OF AMTRAK - IS THE PENSACOLA NEWS-JOURNAL ON CRACK?

Could it be that the once respected Pensacola News-Journal editors and writers are now smoking crack? Probably not, but one might think so with the outrageous editorial commentary from Mr. Mark O'Brien.

Actually the commentary itself was pretty entertaining, even funny at times, but Mark completely fumbled the ball with these words:

The city should give up the ghost on AmTrak reviving passenger service here and do something with the empty train station on 14Th Avenue.

First off Mark, you did better then most, you didn't call it Amtrack. But the word is not AmTrak either, it's a registered trademark name, Amtrak.

The remarks also demonstrate a typical complete lack of grasp of the transportation and energy problems facing our nation.

The attitude that the Sunset Limited didn't work out, Katrina killed it, it's gone so lets give up has a sort of odd Yankee ring to it. You might recall in history 101, that our one-time Southern Army was out numbered 10 - 1, yet was able to smack the Federal troops around for nearly 5 years. Why? Well it is said, Southrons NEVER consider the odds before a battle, and brother THIS is a battle.

Amtrak has not failed, in fact it has been one of the most successful things the federal government has ever attempted. Did you know it was designed from the start to fail? Did you know about the Penn Central Official whom on "Amtrak Day" back in 1971, went screaming and dancing through the HQ offices shouting "WE'VE DONE IT! WE'VE SHOT THE PASSENGER TRAIN! WE'VE KILLED IT!" Mark, do you really think Richard Nixon, Conservative, Republican, wanted trains full of happy people riding around on a federal dollar?
Not a chance.
What happened is, that in spite of their best efforts, including 35+ years of starvation portions or financial support, scraps from what ever was left of the billions that we spend on airlines and highways, Amtrak is still with us. Today's Amtrak is stronger then ever, posting gains in ridership as high as 25% per year in some markets, and solid gains in all the rest.

So what about Pensacola? Should we turn the depot into a restaurant? a bus station? a new strippers bar? Maybe a newspaper office?
NO!
Pensacola should be thinking about adding a side track with a switch at each end, and a capacity of a locomotive and perhaps 3 - 10 passenger cars. Something that could hold a lay-over of equipment for frequent day trains between Jacksonville and Pensacola. 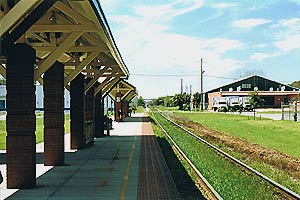 In case the News-Journal missed it, Amtrak has a new lease on life and it's only going to get better:

A new budget, of some 15 Billion dollars and a steady federal investment stream. This is up from 35+ years of $0 - $900 Million dollar budgets. Notice a difference there Mark?

Didn't the News-Journal read the conditional Amtrak re-authorization passed by both house and senate and signed by President Bush? In order to get the $15 Billion, Amtrak MUST return service between New Orleans and Sanford, Florida. Uh, Mark, the only route runs past that Pensacola station.

What the law doesn't say is how the trains will be scheduled or even it must be the Sunset Limited. Frankly I would doubt the wisdom of sending a long-distance cruise train through the Mobile-Pensacola-Tallahassee-Jacksonville stretch in the dead of night. The Panhandle is just too thinly populated, too rural, for decent passenger boardings at 3 AM. What I expect will happen is we will see an all daylight "Gulf Wind" pocket streamliner running from the Big Easy to Florida's First Coast.
More then one train a day?
Fast frequent daylight trains do well even in freeway adjacent rural corridors, look at the little 2 car San Joaquin trains in California, which started with a single daily run from the Bay area to Bakersfield. BAKERSFIELD! Not exactly the Garden of Eden, nor is it a giant metropolis. Those stops have a real panhandle ring to their names too. Big important sounding towns like Hanford, Denair, Wasco, Corcoran and Madera, on the San Joaquin, could just as easily be Crestview, Madison, Lake City, or Chipley on the new "Gulf Wind". In California, where the worlds most auto centric society is abandoning their cars in droves, that one little train has grown to be a 12 daily corridor trains.

I happen to have some information that The State of Florida has actually received a brain from the great and powerful wizard of Transportation, and is considering a similar corridor between Jacksonville-Tallahassee and Pensacola. Frankly, the cost per seat or per train actually falls with more frequent service. The theory is sort of like opening a store with one product on the shelf or one with many products, which one do you think will succeed?

Mark? Better tell them to build the side track, toss in some extra platforms, and some landscaping, because your train is coming.