ATTENTION ALL TRANSIT BLOGGERS - Jacksonville's Impending Disaster Could Reach You!

THE DEVIL WENT DOWN TO FLORIDA 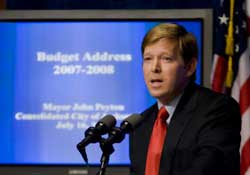 Mayor John Peyton, devil of mass transit?
In a city growing fast enough to self fund Light Rail, Monorail or BRT, we are suddenly facing the Transit Devil himself. We may need all the commentary and attention we can get on this subject. I'm asking all blogger's to steal this story, edit, copy or otherwise let it be known that our Jacksonville Devil, needs a national butt kicking or we'll be kissing all mass transit goodbye here on Florida's First Coast. We need NATIONAL ATTENTION PLEASE! When the City Council Google's and reads your words of wisdom from the far corners of this nation, they'll understand, they're being played like fools.
Jacksonville citizens are wary that a financial restructuring Mayor Peyton plans to submit to the City Council will set back plans to extend bus service and could cripple Rapid Transit/Light Rail funding in the long run.


In a bill called, The Better Jacksonville Plan or BJP, resides $2.25 billion in projects, approved by voters in a 2000 referendum. The program thrives on sales taxes.


As The Transportation Authority is in charge of mass transit and highways, road projects are split between the city and JTA, with the city handling local thoroughfares.


Peyton said he'd rather see the local projects completed while state and federal dollars are sought for the highways. Apparently the word "Transit" is not in his vocabulary.


"To me, it's not local versus state. It's Jacksonville," JTA Executive Director Michael Blaylock said. "All of these roads are in Jacksonville and they're for the people, the workers, drivers - everyone."


JTA operates independently of city government, but some of its funding is administered by City Hall. And that's becoming a sore spot.


Last week, Blaylock unveiled projections showing the city likely would be taking control of 70 percent of BJP sales tax money under Peyton's plan, although no numbers are official. The original plan was closer to 50% JTA - 50% CITY.


He said the Peyton plan could lose $174 million in funding for JTA, including $94 set aside and ear marked for A Rapid Transit system.

"They're asking the JTA to forgo our money so they can work on their own projects," JTA spokesman Mike Miller said, referencing an agreement that was promised to the tax payers around two decades ago, when a half-cent sales tax replaced the city's toll plazas.

Now it appears that the Mayor want to violate the trust.


When Better Jacksonville passed, that half-penny became part of the funding stream. The city agreed to collect it while paying a amount equal to the tolls, plus annual interest, to JTA. The problem is, Peyton doesn't believe that the City can afford the luxury of quality Mass Transit. Seeing it as the poor mans ride, Peyton had rather build more freeways.


Peyton's plan would extend a 6-cents-a-gallon gasoline tax through 2039 as a financial baseline for JTA. Better Jacksonville projects, which were set to finish in several years, would extend through 2019.


Blaylock said he's wary of counting on gas taxes as an income source as the agency tries to acquire long-term rapid transit project financing. For one, federal transportation estimates show Americans have driven roughly 100 billion fewer miles in the past year because of gasoline prices.


Also, he said, by 2039 he wonders if cars will even be running on gasoline.


The council is expected to see legislation next month.


So at the start JTA and the Citizens of Jacksonville had secured:

A dollar amount equal to the toll revenue on 4 bridges (including 2 interstate highways) plus interest as a mass transit baseline, as promised by the City.

A A 100 Million dollar set-aside to build a Light Rail/BRT Transit System.

We also have IN-HAND, studies on

If the Peyton Plan passes, all JTA will have is:

A 6 cent gas sales tax revenue stream, and the balance of the monies and deals with the City will be canceled.

We'll build a few miles of black top or concrete roads with the former transit money, and won't get a single development or quality investment for our efforts.

Bus service will be cut to the bone with routes appearing and vanishing with the ebb and flow of the tax dollars.
Streetcar: O
Commuter Rail: O
BRT: O
The mayors office will stare stupefied out the window, and wonder why "other" Florida cities are booming with development as they chug toward their own rail systems.

I can hear the pathetic strains of the officials as we're passed by, again and again by the big bucks looking for unique and effective transit:

"Say fellas wait, Jacksonville has roads, good ones, ever seen one?
For all of our cities, let's make this thinking stop before it starts to spread. Show the nation how detrimentally zero transit would effect us all. Post this anyway you want, but understand it's a case of Living Neanderthals in Jacksonville.
Posted by Bob at 2:40:00 PM