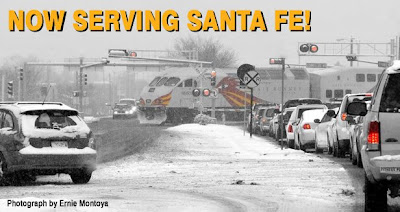 Governor Bill Richardson Announces Debut of Rail Runner Express in Santa Fe
SANTA FE – Governor Bill Richardson today announced that after nearly a year-and-a-half of construction the New Mexico Rail Runner Express is ready to ride into Santa Fe. On Monday, December 15, 2008 the Governor will be joined by state, local and tribal officials, and several members of the public for the first inaugural train ride from Albuquerque into Santa Fe.
“This is a historic event that will bring long-term economic benefits to New Mexico and change the way we travel along the Middle Rio Grande Corridor,” Governor Richardson said. “During these tough economic times, the Rail Runner Express will provide thousands of commuters a much-needed savings while offering them a safe, viable and efficient transportation alternative.”
“The Rail Runner Express will change the face of transportation in New Mexico,” said State Transportation Secretary Rhonda Faught. “With initial estimates of nearly 4,500 commuters riding the train between Albuquerque and Santa Fe on a daily basis, this will not only take a lot of stress off our roads, but will also enhance safety.”
“Bringing the train to Santa Fe represents the historic culmination of five years of hard work, and a significant investment in the future of New Mexico,” says Lawrence Rael, Executive Director for the Mid-Region Council of Governments. “As a regional organization, the Council of Governments has been proud to work with the Department of Transportation to make this project a reality. This is about our children having an alternative transportation system to work, play and travel in the region for generations to come.”
This amazing project has been done in record time. Traffic between Santa Fe and Albuquerque on I-25 is very heavy. The sight of these trains racing past in the median will be their own best advertising. Congratulations to the forward thinking Governor, Mayors, NMDOT and people of New Mexico.
Isn't it a shame that here in the Southeast we continue to have freeway robber-barons that have never seen a highway they didn't love? Atlanta's recent and completely antiquated editorial calls for more highways and less nostalgia. Meanwhile in Jacksonville, even with gas at $1.60 per gallon, transit ridership is holding firm on JTA buses and monorail at over 1 million a month! These numbers are 25 year records, yet mayor Peyton is trying to sink the entire mass transit system by stealing the funds for pet road projects.
The battle cry is always, "We just don't have the density," (though we're more densely populated then Charlotte). This is hogwash, the Rail-Runner in New Mexico passes through several miles were I defy our mayor or anyone else to find a single living thing. Maybe it's just a ghost from our own past, this time WE are ALL THE SLAVES to our own STUPID ACTS. JT
Posted by Bob at 1:15:00 PM