THE ORANGUTAN GANG STRIKES BACK - Embrace You Asphalt! 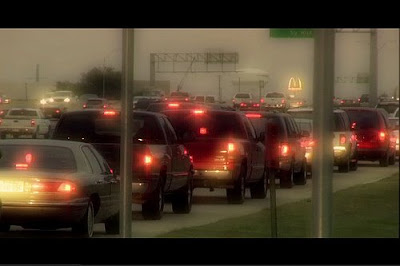 From "The Overhead Wire"
Monday, September 8, 2008
Opposition Pundits on Parade

Ron Utt of the Heritage Foundation is worried. So are all the other anti-transit pundits out there. The newly minted interest in transit is encroaching on their road loving ways. A recent AP article on rising transit ridership captures Utt's opinion, proving that balanced transportation and oil independence means nothing to the conservative crowd.

Ron Utt, of the conservative Heritage Foundation, said transit is "inconsequential in terms of reducing congestion or greenhouse gases" and that people who want to use transit should simply pay more. Citing the example of a Washington-area commuter rail, Utt said: "If more people want to use that and more people have to stand, I don't know why that should place a financial burden on people in Iowa."
Sure Ron, that's why almost a million people per day take Metro in DC. I have a really great idea, how about people pay the true cost of gasoline or roads or airlines. Let's also make people pay directly for air traffic controllers and the highway patrol. And why should I pay for a rural road in Iowa? All transportation is subsidized, let's stop the favoritism towards one mode and pretending that cars pay for themselves.

Then there is our favorite cipher, Randal O'Toole. His most recent call is to cancel the Denver Fastracks program claiming it's bad for the environment and social engineering. You know, the usual junk.

O'Toole, many academics and other anti-transit activists understandably do not wish to discuss the wider, systematic impacts of transit on transportation patterns and land use. One key study estimates that for every passenger mile on transit, slightly more than two urban vehicle miles traveled (VMT) is suppressed or foregone. This study documents the connection between transit and lower vehicle usage that has also been documented in dozens of other studies. This effect is particularly significant when less than 40% of U.S. residents have easy access to transit at the present time.
But what annoys me the most is that stupid no one rides transit argument. Well no one has the option to take it! New York City has transit, people take it. Washington DC has a rather good subway system, people take it. But when the green argument for him fails, he can always fall back on social engineering. You know, the kind that took place from 1950 to the present when cities built roads only and subsidies were funneled to development related to roads.

The other support for FasTracks comes from those who want to socially engineer Colorado lifestyles. They use light rail as an excuse to build tax-subsidized high-density housing projects on properties taken from their owners by eminent domain near planned rail stations. Yet few Americans aspire to live in such dense housing, and such compact development makes little sense in a state that is 97 percent rural open space.
Hmm. No one in Colorado wants open space, just build on it. I'm sure John Denver wouldn't mind. And no one wants to live in high-density housing projects, that's why TOD commands such a low price premium with buyers. No one ever wanted to live in LoDo right? What about all those road, pipe subsidies.