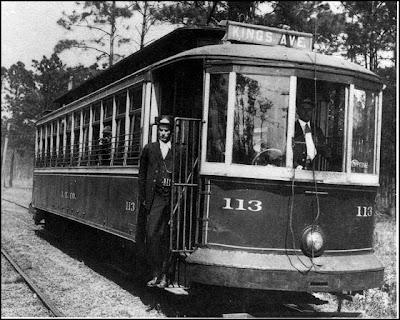 Amazing new photo that surfaced in "Roots Web" of Jacksonville Traction 113 on the Kings Avenue Line. We were so far ahead of our time, using in the street tracks only in downtown and medians or private tracks elsewhere. Then we jumped the gun and shot ourselves in the foot, converting the whole thing in a giant dirty General Motors-Firestone-Standard Oil-Phillips Petro buy out. With fuel prices soaring, and highway funds on zero, congestion is not going away, it's time to think streetcars again. The following is a reprint of a Florida Times-Union Story.

By The Times-Union
Retired transportation consultant Bob Mann is either a visionary or hopelessly stuck in the past, depending on your view of his proposal that would return streetcars to downtown Jacksonville.

But on one thing, everybody agrees: He's tenacious.

Mann has been advocating streetcars - light trains on tracks, powered by overhead electricity and sharing the road with cars - for about three decades.
And, amid increased traffic congestion and spiraling gasoline prices, he's making some headway. In fact, the Jacksonville Transportation Authority is doing a study on the feasibility of making Mann's proposed track part of the city's transit system.
There is much to like about Mann's proposal:
Cost. Because it would use existing tracks, the system presumably would be relatively inexpensive.
Potential ridership. Not only would the uniqueness attract some riders, it would serve a heavily traveled route that includes Five Points, the convention center, the Landing, football stadium and library.
Tourism. Vacationers might pull off Interstate 95 for a ride. While here, maybe they would patronize some local businesses.
Economic development. In other cities, housing and businesses tend to spring up along streetcar lines.
For example, USA Today reports, Portland's streetcar system "attracted about 100 projects with $2.3 billion in less than five years, all within two blocks of the line. They include 7,248 housing units and 4.6 million square feet of office and retail."
The proposed line here would go through some areas, near downtown, that clearly need an infusion of economic development.
And, if they are made aware of the Portland experience, maybe developers would help pay the costs.
What does the future hold? Something. Mann just isn't sure quite what.
He sees three options:
- museum. Put the streetcars in a building and invite people to look at them. That could increase public support for funding.
- For a little more money, a short track might be built to carry people to and from the museum. This might spur more donations.
- With sufficient funds, build the system and use it.
There may be a trend to streetcars. Dozens of cities either have or are planning them, Mann says.
What about Jacksonville?
Proceed with caution. Every dollar spent on streetcars is a dollar less for buses or other forms of transit*(see blogger note).
But this seems to have potential.
* Blogger Note: Phil Fretz of the TU did a great job in grasping the meat of the streetcar race in Jacksonville. On this one point he may have stumbled a bit, as with each streetcar deployed, it relieves several buses. Those buses can then be sent into new areas or to close headway's (make service more frequent). Thus every dollar for streetcar is NOT a dollar lost on other transit.
Our motto should be, implement streetcars downtown, but build to Light Rail standards on the key downtown loop. The slightly more expensive LRT tracks would be used by the streetcars and in the future, if the time comes to expand to the Beaches, the downtown core is already built to handle the bigger cars too.
Posted by Bob at 12:23:00 PM