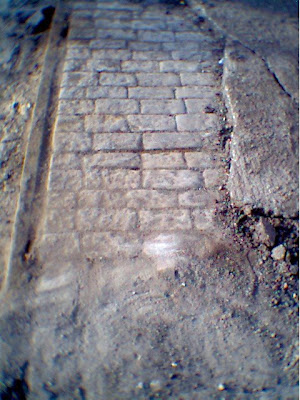 The last streetcars in Minneapolis were burned in 1954. James Towley (left) presenting check to Fred Ossanna (right) with a burning streetcar behind them (1954).Minneapolis Collection.

For so many years Jacksonville has depended on the automobile for 95% of it's transportation needs, with about 5% using the JTA bus system, that we don't have many living citizens who remember a more balanced time. Ask the average Jaxson why we don't have streetcars and your likely to get one or more of the following answers:

"Oh we do, JTA has a Trolley," (refers to the potato-chip-truck-thinks-its-a-trolley-bus).
"Well streetcars were tiny and slow, so we put in modern buses and freeways."
"We're not big enough or dense enough for streetcars, we don't need them."
"Streetcars block traffic and buses run with traffic."

All of these "facts" are false on one point or another. The FACT is the streetcars were bought out and destroyed one by one by one of the first giant Transit Monopoly's in the United States. Owned by General Motors - Firestone - Standard Oil and Phillips Petroleum, through a maze of smaller holding companies, the trail usually leads to the highway groups "National City Lines Corporation." Just as no one transit system today could compete on Wall Street with any of the above giants, the rail transit companies, mostly local, were helpless to fight off the unwanted attention. Standing alone, one by one, the streetcars were bought out one by one and converted to bus. By the time the industry realized they faced certain extinction, the depression had dried up the loan money holding back expansion or modernization. When the few survivors finally banded together with help from the large electric industries such as GE, St. Louis Car Company or Westinghouse, World War II material rationing stopped them cold. All of this played into the highway group and National City's hands. Each story is unique, but all have a similar tone of high finance and smoke filled back room deals.

So read on from this little story first published in "The Overhead Wire" Blog, by "Pantograph Trolley Pole", and see how the deal went down in the Twin Cities, and I'll finish with comment on Jacksonville Traction:

Well part of the story I had never heard before was told on one of my list services by transit expert and former Deputy Secretary of Transportation for Pennsylvania Ed Tennyson. He states that at one point TCRT had saved up $10 million dollars to buy new streetcars and repair the tracks but got destroyed by Wall Street speculators. Well, I'll let his words tell the story.

The Twin City street car to bus conversion was ironically caused by a pro-street car management, a man named Strouse, I think he was. During gasoline rationing he saved up ten million dollars ($ 160 million at today's prices) to buy more PCC cars, re-lay more track, modernize the rail system.

A shrewd vulture on Wall Street named Green saw all that money in the bank and solicited the stockholder votes to throw out the street car management so Green could disburse all that money to stockholders including himself. His first attempt failed as the stockholder had pride in the company but inflation hit them (and everyone else) so Green prevailed on his second take over attempt. Strouse was fired and the money was paid out to stockholders leaving nothing for renewals.Wall Street neophytes saw those big dividends and sent the stock price soaring. Green sold his. Buy low and sell high. Local politicians took Green's place, one named Fred Osanna (In the picture above), a political lawyer. He got a promise from General Motors to loan him all the money he needed to rid the city of street cars and they had National City Lines send him their Barney Larrick to manage the job. Since there would be no more profits, Osanna and Larrick sold all of the copper wires, car barn property and salvage from scrapping cars to their wives or other relatives at a rock bottom price. Their relatives waited a few weeks then sold all the junk on the market for far more than they paid Twin City Rapid Transit for it. Roy Chalk did the same thing in Washington but was careful not to go to jail. Osanna and Larrick both went to jail, for defrauding the other stockholders.

Sad Story, but the Twin Cities are now back on track and breaking records with their new Light Rail System. Meanwhile here in Jacksonville, we have our own sad closing to talk about.

Jacksonville Traction was the largest streetcar line in the state of Florida topping out at some 60+ odd route miles. In 1926, the system was beloved by the City, in fact City Commissioner St. Elmo Acosta (yes, the Acosta Bridge with the Skyway track is named for his transit savvy memory) floated a bill before the Commission to buy the entire Florida East Coast Railway line from San Marco, along Beach Blvd. to Jacksonville Beach and Mayport. He wanted to convert it to Interurban operation, what we would call today, Light Rail Transit. At the same time 3 other Companies proposed to link Jacksonville with: St. Augustine, another between St. Augustine and Jacksonville Beach, and yet another between Jacksonville and Ocala along today's highway 21.

Acosta's plan was put off and vanishes off the books. The collapse of the great Florida Boom took out the other 3 companies. Jacksonville Traction itself skidded into bankruptcy, as the city increased the pavement requirements, forcing the company to pave it's tracks or roads along the tracks, then refused a fare increase of 2 or 3 cents.

In 1929-31 it was no secret that the company would be issued a new franchise soon as the old one had expired. On the block a group of Southeastern "investors" came into town and talked about building a modern bus system. When the City and the Jacksonville Traction Company failed to reach an agreement with the buyers the deal fell through. Bad press dogged the Streetcars as they were now labeled as "old fashioned," and "bankrupt". Needless to say the deepening depression didn't do anything to help with the company's solvency.

Finally a new entry came to town with plenty of money to toss around. Motor Transit Corporation, stepped into the void and offered a package deal. The Streetcar Company would be sold, a new franchise issued, and Jacksonville would become the home of a new type of General Motors distribution center for the entire southeast. In the fine print the contract stipulated that the rails, poles, and wires had to come down, that all streets would be repaved, and all streetcars sold for scrap. Duly signed in 1932, the last car ran from the Courthouse, up Bay to the Brooklyn Car Barns in Riverside, on a cold wet December day in 1936. Motor Transit had pulled off what is perhaps the first big system purchase, and Motor Transit was owned by National City Lines.

In Tampa and St. Petersburg the streetcars lasted another dozen years, when the same suitor came calling. But already on the run from an increasing load of legal suits, the deal fell through. National City never fully got Tampa's and St. Petersburg's system, but the City Councilmen all got brand new GM LaSalle automobiles as it closed down.

So in the end, Jacksonville was big enough, dense enough, and advanced enough for streetcars. In fact so much so that we had the leading system in the state and nearly had the largest system in the South had the interurban's been built. Blanding Blvd. wouldn't be the mess it is today and sidewalk cafes in Riverside or San Marco wouldn't gag on the sulfur and carbon from the stream of buses that blow past every few minutes. More then that, these recent discovery's demonstrate that our system, built largely on private track, was just the sort of thing GM knew they couldn't combat without the use of back room - pool hall deals. Freeways as it turned out were never free. Jacksonville Traction is exactly what we need to get back, it's a shame our new system can't be paid for by certain auto makers, tire and oil companies.