Refusal To "Super Size It" Can Be Good For Our Health 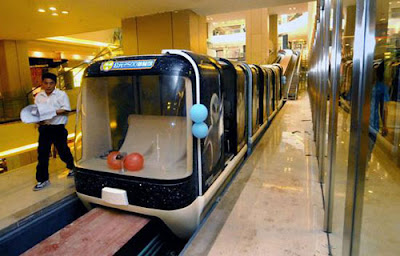 Every day I hear the cry's, "Why can't we do something about the suburban sprawl of Town Center, Bay meadows, Deerwood, Southpointe..." The list is endless. My reply has always been a simple, WE CAN! For years and years, I have played with a concept of an inhouse transit system for a long shopping mall like our own Regency Square, or the new sattelite downtown jungles that are spinning off into mini self contained cities within a city. My ideas have ebbed and evolved from miniature monorails, now called Personal Rapid Transit or PRT systems, to vintage albeit small streetcar's rolling through a green landscaped garden running the length of the route. A few years back a mall in Southern California, hooked up with a major theme park ride engineering and building firm and put the streetcar right down the avenue. "As-if "our own Town Center would think out of the box like that, the California success has been unprecidented, luring stores and crowds that might have otherwise gone elsewhere, just for the experience.

Now the official China News Agency has released photos of a spiral metro in a 6 floor Mall in Shanghai. The following is their glowing report. But looking beyond the glitz and gloss of the typical Communist articles, one can still see many possible applications of this very idea right here in Jacksonville. Micro-systems to feed into commuter rail, light rail, streetcar or BRT transit, mall systems, and office park-apartment distributers, running on clean electric energy from any number of green sources.

Shopping can be fun but exhausting, especially for girls wearing high heels.
So how's this for a solution - what if ladies could browse through stores while
on a train? Sounds bizarre? Believe it.A newly-opened home furnishing mall in
Shanghai features an in-house metro train that can take shoppers to any store
inside the 6-story building, the local News Times reported Monday.The
14-meter-long train runs on a spiral rail and is the first of its kind in the
world, the newspaper says.Besides the train, the leading furniture chain Red
Star Macalline offers more creative shopping concepts. The building's interior
design features many trees and water landscapes, supporting its claim of being
China's first park-style shopping complex."It's an absolutely different
experience here," a visitor surnamed Liu was quoted as saying. "It feels like a
forest park."