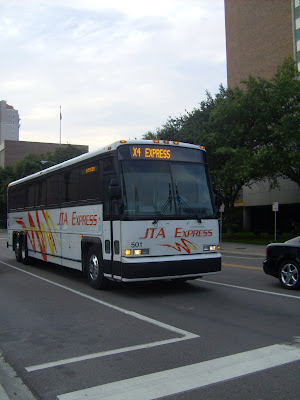 KEEPERS OF TRANSIT AQUARIUMS IN JACKSONVILLE?

In response to several articles that have labeled rail transit, light rail and streetcars as "political graf", an interesting side by side comparison has been done. Does the highway based transit really work "Just like rail only cheaper?". In balance, keep in mind that NO WHERE would I suggest that Light Rail or any rail take on the transit for Jacksonville by itself. Can't be done without the buses, and frankly a Light Rail Lite BRT system, one that extends the reach of those trains, or streetcars, is just what the doctor ordered. We need them ALL.

From the Orphan Road:

For an example of how rail can more more people more cheaply, we need only look to Washington DC. The Washington Metropolitan Area Transit Authority, the operator of DC Metro, spends almost exactly the same amount of money as King Country Metro does, $560 million to $580 million. Except for that $560 million DC metro moves almost a million people a day on rail (three times what KC metro moves per day with its buses) and the WMATA agency provides buses that carry another 120,000! It’s only possible because of the investment put in place years ago, and residents there can reap the benefit of a reliable, traffic-separated transit system that’s relatively cheap.

And DC's population density is roughly the same as Seattle's, so it's not like they've achieved this amazing transit ridership simply by crushing everyone into Manhattan-style apartments.
Posted by Bob at 10:02:00 AM