When is a toy Better Then Real Life? 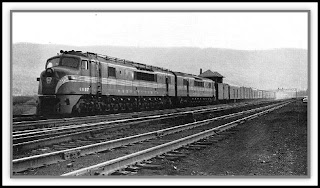 It had to happen sooner or later, but the world of model trains just got pushed over the top with an incredible model. This is not a modelers blog, nor is it the domain of model makers, toy boxes, and/or the National Model Railroad Association. But there is no denying that one of the newer importers of model trains, has hit a home run, and brought to life a brilliant, and historic, miniature of Jacksonville's, mechanical history. Broadway Limited Models, Paragon Series, is just now going into full production on an HO scale, Baldwin Centipede. Years ago, several local model railroaders made it a point to speak with a large group of manufacturer's about this rare but historic engine. We were promised that nobody, EVER, would attempt to put this monster diesel, into a miniature world. Not fully understanding such a statement, some of us felt that perhaps there was a slim chance in miniature. Certainly the market would be tiny, just 3 railroads owned them, and one of those was in Mexico. We all had to agree though, that building a model of the Centipede would truly be a one of a kind collectors engine.

This locomotive holds fantastic interest and memories in Florida, as the Seaboard Air Line Railroad, once had a fleet of them. At that time (Late 1940's) steam locomotives still reigned supreme. The railroads though had seen the economy's of the Diesel age, and the various locomotive builders couldn't keep up with their orders. . Baldwin Locomotive Works, in Eddystone, Pennsylvania, had one of the largest industrial plants in the world. Through two World Wars Baldwin, had churned out countless thousands of steam locomotives. Baldwin had been so busy with its fabrication of war materials that it almost "forgot" the development of a line of new diesel locomotives. This was a critical mistake that would see the ancient company shutter the doors in 1956. In the last half of the 1940's virtually every railroad was replacing steam, everyone was shopping. General Motors, through it's Electro-Motive Division, or EMD, had kicked off the contest back in the late 1930's, and now in these post war years, the little upstart was miles ahead. Alco had been the worlds largest builder only to find itself playing catch up with EMD. Alco, Lima, Hamilton, General Electric and Westinghouse, all struggled for a share of the booming market. Only Alco and General Electric had any success. Fairbanks Morse, came in with a complete catalog of diesel locomotive offerings, all were built based on their opposed piston, submarine engine, of war fame. Except for EMD, which survives today, only General Electric, is still in the game, while Alco, was the last of the early group to close.
When the time came to create a line of Baldwin Diesels, the company had something for everyone, plus a couple of secret weapons to spring upon the market. In those days Diesel Locomotives were often permanently coupled together in sets of 2, 3, or even 4. Had they had regular couplers, and been independent locomotives, none would have rated more then about 1,200 horsepower. (Most of today's engines are in the 3,000+ H.P. range.) About this same time, our very own Seaboard Air Line Railroad, was searching for a fast powerful engine that could handle its undulating profile between Richmond, and Jacksonville. Seaboard, ran right through the center of the area known as the Piedmont. When Baldwin was done explaining the concept for the worlds first high horsepower diesel locomotive, Seaboard, had it's specifications, and Baldwin, had a customer. In all 4 railroads jumped on the band wagon each ordering a small fleet of these giant, strange, exotic beasts. Union Pacific, with an order for a single unit canceled their order before delivery, the reason is lost to history. This left Baldwin with enough orders to build 3 fleets.
I consider myself fortunate to have had the experience of seeing one of these rare engines after they were moved to Jacksonville, to do battle with Central Florida's short steep grades. Your blogger remembers standing at a crossing sign, in an early morning fog, because I had heard a strange sounding air horn off in the distance. I was rewarded for my running up the block, as I began to see a gyro-mars light through the mist. Then with the urgency of an explosion, a huge baby-face (another nickname) locomotive burst from the fog, leading 7 beautiful Seaboard Passenger cars, North into a Jacksonville dawn. A witness to 600,000 pounds moving at 80 MPH, was something you wouldn't soon forget. I lived in Ortega at the time, and some of my friends, crew members on the nearby Atlantic Coast Line, told me the Seaboard, had a derailment somewhere that blocked it's mainline, and so the passenger train was detoured over the Atlantic Coast Line, that morning. I couldn't have been happier.

Baldwin produced the famous "Centipede" diesel locomotives during 1945-48, and sold them to three railroads (SAL, NdM, and PRR). The Centipedes were very large, 91 1/2 feet long, for single units as operated on SAL and NdM, and 183 feet long for semi-permanently coupled pairs as operated on the PRR. Each unit contained two 1500 horsepower diesel motors, so a pair contained four motors and totaled 6000 horsepower. Centipedes were heavy, totaling 1,200,000 pounds (1.2 million) for a pair, with more than 800,000 of those pounds carried by the 16 drivers. These spectacular diesel locomotives are a MUST-HAVE in miniature. The engine will perhaps sense the closeness of the Seaboard-Lackawanna Shops, out in West Jax. If trains had emotions, purchasing one of these models would be to bring it home. Perhaps in the curio cabinet, or over the mantle, the Centipede will draw mechanical, and historical interest, to your home for years to come. At least it will be the topic of wonderment until Broadway Limited models releases Baldwins other giant, the mother of all transfer locomotives.
Bravo, Broadway Limited Imports, thank you for having the courage to release this rare locomotive. Beautiful job Ladies and Gentlemen. You can reach Broadway Limited Imports at:
http://www.broadway-limited.com/paragon2baldwincentipede.aspx
Posted by Bob at 4:29:00 PM