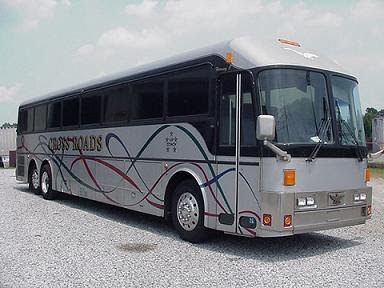 BRUNSWICK PLANS FOR MASS TRANSIT !
More then just another tour bus, the Brunswick system has the potential to build-in the tourism and intermodalism unlike any other new-start bus operation on earth.
These coaches by Silver Eagle go way back with me. While sitting in a sales meeting with a Canadian coach builder the salesman said, "You don't want an Eagle, they are built by sub-standard Mexican workers..." Sub-Standard? Did this guy know my wife who was sitting across the dinner table was from COLOMBIA? All racism aside, if your in the business and haven't looked at an Eagle, let this old Trailways Supervisor introduce you to the most beautiful and comfortable Motor Coach in the World. JTA? Brunswick Transit? For those longer commuter runs - LOOK AT A SILVER EAGLE!

Amtrak comes screaming through Folkston, Georgia, close to the stop listed for "Brunswick and The Golden Isles". Did you think High Speed Rail was only in the North? Watch these trains pass and just try to focus on a single car, I dare you. 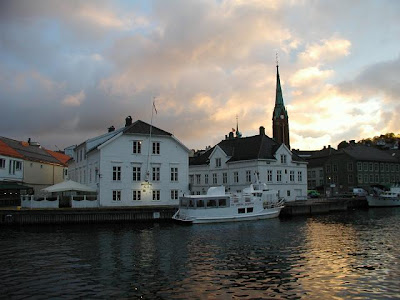 You want opinion? Brunswick's Historic Waterfront is a Post Card waiting to happen - All of the time! By the way, so is the rest of the reigon, and yes, they have hotels.
First came Valdosta TRANSIT'S Announcement, with a state university and Moody Air Force Base, a mere 75 miles on the arrow straight Norfolk Southern Railway from Jacksonville.

Now comes word that little cousin to our North, the one time Airship capital of the Southeast, Brunswick, Georgia, is also about to get on the bus.

This is fantastic news, as both are within the window of Jacksonville's direct economic impact zone, trade zones, and potential SMA.

For those that missed Brunswick, it is off of I-95 some miles to the East along the Coastal Georgia Islands and resorts. As a child I marveled at the great Naval airships which were stationed at NLTA Glynco. The hangers were so big, they had their own weather forecast INSIDE! Today the former base is a national law enforcement training center and center for the FBI. Brunswick, though it is off the beaten path, is nestled among some of the most beautiful resort islands in the world, as much a step back in time as Seville, Spain; St. Augustine, Florida; or Cartagena, Colombia.

Between Brunswick and Jacksonville is St. Marys and the old WWII army port of Kings Bay. Though that base was completed as the major load point for transports with a deep harbour, it opened too late to be of any use in the war effort. So for many, many years, it simply slept, no one really knowing what to do with this giant unused base and port facility. Then along came the Trident Nuclear Submarine fleet and a need for an East Coast home port with deep water. Suddenly Kings Bay Naval Station was born, at the time the 7Th Naval base in the Jacksonville district.

Though the bases have been cut back to 5, they still play a huge role in the local economics.

One would hope with the plans for Jacksonville Transportation Authority to go regional, someone would include Valdosta and Brunswick as well as Waycross, Georgia in these plans.

Here is the Newspaper story out of Georgia:

The Brunswick Area Transportation Study Policy Committee, which includes representatives from the city, county and business community, adopted findings of a recently completed transit study Monday and voted to move forward with a plan that could create public transportation here by the end of 2009.

Brunswick and Glynn County have already set aside $200,000 each for the system.

Instead of setting up a cost-sharing agreement to fund administration of the system, the committee voted to request bids from outside management companies. The company would use from profits from operations to pay administrative costs of running the system while the city and county would provide the buses and bus stops.

The first route would run weekdays at 30-minute intervals along a 6-mile route between Mary Ross Waterfront Park, downtown, and the Glynn Place Mall area. Service would be from 6:15 a.m. to 6:15 p.m.


The third route would run from the city to the southern end of St. Simons Island. It is being considered optional because fewer people would expected to use it than the initial two routes to get to and from work.

The fourth would be weekend service on the weekday route of Mary Ross Park to Glynn Place Mall.

Planners anticipate that the total plan would require 10 years to phase in all routes.

A few possible hurdles could delay the bus system, but the county has taken steps to expedite getting grant money from the federal government, said Dave Hainley, community development director.

"This has been a long-range desire for the county," Hainley said. "We are one of a few counties our size that don't have public transportation."

The Transit Blogger has a couple of suggestions for this study.

1. Brunswick has always had a dedicated railroad (AMTRAK) stop over on the mainland. As more schedules or trains are added, why not schedule one of these smaller coaches to meet not only the Amtrak Trains but also the aircraft with direct connections to the hotels, history, port and the Golden Isles resorts. In other words get public transit into the game of serving all level of patron.

2. Work with the US Navy at Kings bay, the historic towns of St. Marys, Georgia - Fernandina Beach, Florida, to create sweet lollipop shaped routes that circulate the respective metro, then fly to tie it all together. JTA buses would circulate the main hotels, airport and transit centers in Jacksonville, then make a freeway dash North to Fernandina Beach, St. Marys-Kingsland, and Brunswick. Meanwhile the BRUNSWICK TRANSIT buses would make the circuit of port, airport, law academy, tourists islands, then break for a similar freeway dash south ending in Jacksonville. As commuter rail, Southeast High Speed Rail, and expanded Amtrak come into play the schedules could be altered to serve all modes.

3. Don't forget, AMTRAK and the AIRLINES often carry advertising in their schedule cards, folders or national timetables. The best way for a transit agency to assure it can stand up to Hertz or Avis, is to have a few words in these publications and websites to let the passengers know that you offer a service - fast - clean - comfortable - kind and far cheaper then another car rental or taxi.

4. It should be remembered that Greyhound and perhaps some of the Trailways partners are operating along these routes. If they could be made interested, what a fantastic opportunity to create a true cooperative network from the Golden Isles to the Port of Gold on Florida's First Coast. What a micro-mega system this would be with Amtrak-JTA-Greyhound-Trailways-Brunswick Transit all on board as players.