ANOTHER BILLION FOR THE PORT OF GOLD

Sunrise over the St. Johns River - Just beyond this scene, around the bend is The Port Of Gold. 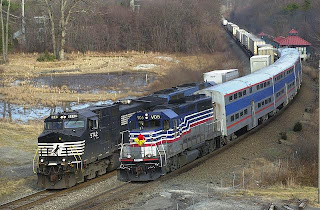 How Long Until The All Aboard?
Finally, some great news from a City that isn't falling apart. Another Billion in economic impact, hundreds of millions in new spending, and at least 5,500 more jobs.
Now the Transit and infrastructure race is on.
As Jacksonville scrambles to improve the parkways around the St. Johns River, the sea port is gobbling up land faster then a starving badger in a meat shop. Even in this time of credit crunches and cut-backs we're on a roll.
A trip along Zoo Parkway or Hecksher Drive is like driving through Disney World when it was nothing but endless dirt and dozier's. Miles and miles of dirt and dozier's.
Every bridge along the waterway, which Floridians know crosses countless estuary rivers and creeks, are having to be rebuilt for container traffic.
Up in the CSX Railroad tower downtown, plans call for a new freight rail line which will go North from JaxPort along the old Seaboard mainline, then cross over to the current CSX Jacksonville-Folkston mainline on the old Gross Cut-Off.
The Jacksonville Transportation Authority is wrestling with conceptual ideas on Commuter Rail to the foot of Zoo Parkway, Dunn Avenue and I-295E. From those stations buses, either regular transit buses or BRT could take the hordes of new employees to and from their jobs.
Some may recall with humor the funny advertisements Jacksonville Economic Development ran back in the 1970's. "Why are thousands of New Yorkers leaving town for the BIG CITY? - JACKSONVILLE!" But my hands down favorite was, "Ask any Atlantian the way to THE PORT - JACKSONVILLE!" Atlantians, got up in arms over those full page spreads, but it's all water under the keel now. Since that time we have long since trumped Atlanta's population within our corporate boundary's. Time will tell if there is a another transportation office tower rising on the banks of our majestic river.
FROM THE ATLANTA BUSINESS CHRONICLE:
After months of negotiations, Hanjin Shipping Co. Ltd.’s board of directors has approved a 30-year lease with the Jacksonville Port Authority.
The South Korean company, which has its U.S. corporate headquarters in Atlanta, will open a $300 million container terminal in Jacksonville and have it operating in late 2011. The move will create more than 5,600 jobs and have a nearly $1 billion annual impact, according to JaxPort officials.
Construction of the 88-acre terminal facility is expected to take about two years once the permitting process is complete. It will be adjacent to the TraPac Container Terminal, which will be open in January 2008 to handle Mitsui OSK Lines.
“This is the one-two punch we have been working toward,” said Jaxport Executive Director Rick Ferrin in a news release. “TraPac put us on the map. Hanjin makes JaxPort a major player in Asian and European trade and together the new terminals help fulfill our mission of bringing jobs and opportunity to the region.”
The Hanjin terminal will be the company’s first dedicated operation on the East Coast and will capitalize on the increased traffic spurred the expansion of the Panama Canal.
****************************************************
FROM THE JACKSONVILLE BUSINESS JOURNAL:
Jaxport, Hanjin complete terminal deal
Officials with the Jacksonville Port Authority and Hanjin Shipping Co. Ltd. put the finishing touches on a 30-year lease for 90 acres Wednesday.
The South Korean company’s $300 million container terminal at Dames Point, which is expected to be operating in late 2011, will create more than 5,600 jobs and have a nearly $1 billion annual impact, according to Jaxport officials.

Jaxport Executive Director Rick Ferrin said the deal is part of Jaxport’s goal of being a global gateway and having different types of cargo flowing through the port.

“Hanjin is a key development to that success and vision,” Ferrin said.
Hanjin Senior Vice President C.S. Choi said the company’s Jacksonville terminal will be the most efficient automated terminal Florida has ever seen.
Construction on the terminal is expected to take about two years once the permitting process is completed. It will be adjacent to the TraPac Container Terminal, which will open next month to handle Mitsui OSK Lines. The addition of Hanjin, which operates 200 ships, will triple the cargo-handling capacity at the port.
When finished, the terminal will be able to handle up to a million containers annually.
*************************************************
So there you have it, another DONE DEAL in Jacksonville's Port Of Gold. Watch the lift off of Commuter Rail and BRT in the very near future, as this sleeping giant rockets toward a new position as America's 9TH or 10TH largest city. Boisterous? You bet, I call it home town pride - just watch us grow.
The $100 Million dollar question is how long until we get off our collective wallets and build the promised Rapid Transit lines?