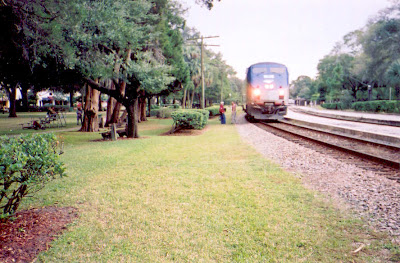 Will this photo mean anything to Amtrak now, or, are we still the dumping ground for left over equipment and tardy trains? After all, Florida is the number one tourist destination in the USA.
Amtrak got a new CEO yesterday as Kummant ran headlong into the Bush Transportation Nightmare. Meanwhile new Amtrak CEO while at the FRA has spent the last couple of years trying to bring down the Austin "Light Rail System" because they called it "Commuter Rail" which put them in his cross-hairs. Another George Bush clone? Time will tell, who knows, he might really turn out to be good for passenger rail. However if hindsight is anything, better bar the door y'all.
Progressive Railroading Magazine had this to say in a news release:
Amtrak names Boardman interim CEO
Yesterday, Amtrak announced it appointed Federal Railroad Administrator Joseph Boardman to serve a one-year term as president and chief executive officer.He succeeds Alex Kummant, who resigned earlier this month after serving in the top post for a little more than two years. William Crosbie, who had been appointed interim president and CEO following Kummant's departure, will return to his duties as senior vice president of operations. Boardman's interim appointment is unusual, says spokesperson Cliff Black, but the board believed that Crosbie needed to continue focusing on the "nuts and bolts" of the railroad, while another executive focuses on Amtrak's future direction. The one-year appointment is flexible and Boardman could be considered as a candidate for the permanent CEO position, says Black. The Amtrak board will conduct a search in the coming months. "Amtrak is at a critical juncture and needs a vigorous management vision and ability to take advantage of this unique time," said Amtrak Chairman Donna McLean in a prepared statement. Boardman has 34 years of transportation industry experience. During his tenure as FRA administrator, he served as the U.S. Department of Transportation designee on the Amtrak board. He also served stints as chairman of the Executive Committee of the Transportation Research Board, and the American Association of State Highway and Transportation Officials' Standing Committee on Rail Transportation. Prior to joining the FRA in 2005, Boardman served as commissioner of the New State DOT for eight years.