Amtrak test train on the Florida East Coast was led by an FEC locomotive that was equipped for the railroads high tech ATC signals. (automatic train control) 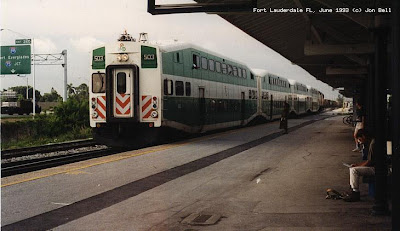 Typical Florida commuter train in Fort Lauderdale. Journalists might want to note the pronounced different look from the Amtrak trains. This one is on the CSX railroad.


This little article appeared in the Jacksonville Florida Times-Union Newspaper. It didn't appear on my blog as I was in the meeting and besides Amtrak's desires on the Florida East Coast and the story or "how important" the Southeast is to Amtrak. We were then told the company would do nothing unless the State sponsored the trains.

Never mind that the Amtrak Representative said that they calculate that a 5 train grid, running:

Apparently it matters little if a route in Florida will cover it's own expenses from the fare box. Either our State Representatives are asleep on this issue or somebody needs a good butt kicking.

The Times-Union writer did a good job on his railroad subject matter. I've spotted only a couple of small errors. The worst is the service from Jacksonville to Miami WOULD NOT be commuter train service. A 368 mile commuter train would be quite a sight to behold. This would drop in place as part of the New York - Miami long distance trains we already have. When the trains arrive or depart from Jacksonville, they would split apart southbound, or rejoin northbound. Just as they have done since the 1800's. Jacksonville Terminal would again be a bee hive of train activity, and the City would stand to gain hundreds of high paying jobs. As engine servicing, dining car commissary, baggage facilities and other support is added that will only grow. The point the representative was trying to make is "IF" Florida would pay the bill, Amtrak would be along for the ride. Meanwhile, those "Amtrak" improvements to the Florida East Coast could then be used by Jacksonville Commuter Rail, between Jacksonville and St. Augustine, a rail distance station to station of 35.0 miles.

The second and lesser error was the statement that the FEC shut down passenger service in 1968, due to a labor dispute. Truth is, the 1963 strike of non-operating unions on the Florida East Coast Railway resulted in the abrupt end of all passenger services on that railroad. While after a long absence, passenger trains would return in two short E9-powered consists that operated due to a requirement in FEC's charter to provide such trains. The two short trains Locals # 1 and #2, only lasted until 1968, and provided connections at Jacksonville with all of the major railroads and trains remaining. But the era of through service from distant cities to the FEC was over. It only took a couple of years before the railroad successfully petitioned to the State Public Utilities Commission to end all passenger service. Almost overnight every sign of a passenger had vanished from the FEC, the stations, with only a couple of exceptions were razed, and for many years the railroad was openly hostile to anyone but the freight shipping public.

Today we have a completely different Florida East Coast Railway, one that has gone through two major changes in management in just a handful of years. The company is still a maverick but now welcomes the attention of Amtrak, railfan's and the general public. With the current mess in Tallahassee and our lack-luster leadership in anything but expressways, Amtrak will continue to "Go South in Florida." But as far as the citizens of this state are concerned, Amtrak only "Goes North or West."

It would use Florida East Coast Railway tracks paralleling I-95.

By LARRY HANNAN, The Times-Union
It's a little early to get nostalgic for 2001, but Amtrak officials have begun talking about turning back the clock and taking a second crack at a passenger train route from Jacksonville to Miami.
Amtrak offers passenger service from Jacksonville to Miami on its Silver Star and Silver Meteor trains, but the Silver Meteor takes nine hours and goes to Orlando, while the Silver Star takes almost 11 hours and goes to Tampa on tracks owned by CSX.
Using the Florida East Coast tracks would create a quicker route down the east coast of Florida while also allowing stops in cities like St. Augustine, Daytona Beach, Fort Pierce, West Palm Beach and Fort Lauderdale.
Speaking at a meeting of the Jacksonville Transportation Authority Commuter Rail Task Force last week, Jay McArthur, officer for state contracts with Amtrak, said the government-subsidized rail company wants to offer commuter rail on the Florida East Coast rail lines that parallel Interstate 95 from Jacksonville to Miami.
"Amtrak thinks the corridor between Jacksonville and Miami is very viable," McArthur said. "The Southeast is one of the most underserved regions in the country when it comes to rail, and Amtrak wants to change that situation."
The federal government recently authorized a new bill that will give Amtrak $15 billion over five years. Increased interest in rail has led Amtrak to consider expanding services.
The rail company set a record for number of riders in 2007 with 25.8 million.
A Miami-Jacksonville route would require a partnership among Amtrak, the Florida Department of Transportation and the Florida East Coast Railway. It also would require millions of dollars, although the cost is unknown.
Officials with Amtrak and the transportation department both expressed interest in the project but said the other government entity would have to take the lead to get the project done.
While Amtrak wants to pursue this route, it won't do it unless the state supports it and partners with Amtrak by putting state funds into the route.
Florida hasn't done that yet, McArthur said.
Nazih Haddad, manager for passenger rail development at the Florida Department of Transportation, said the state remains interested in rail service on Florida East Coast lines, but there has been no recent discussion on the issue.
Amtrak previously discussed the possibility of using the lines in 2001-02. But that plan fell apart because Amtrak was having financial problems and the state was unwilling to allocate as much money to the project as Amtrak wanted.
Passenger service on the Florida East Coast lines occurred until 1968. The Florida East Coast Railway, founded in the late 19th century by Henry Flagler, ended service that year during a labor dispute.
Florida East Coast officials are aware of Amtrak's renewed interest but said there have been no substantial discussions about offering service.
There would need to be some rail improvements made to the existing lines before Amtrak could offer service, said Scott Williams, general counsel for Florida East Coast.
Those improvements would allow Florida East Coast Railway to continue shipping freight on the lines while Amtrak also operated.
That would guarantee passenger and freight rail could both use the tracks without delays.
It would also be essential that the state partner with Amtrak, said Ken Charron, commercial counsel for Florida East Coast and the company's representative with the Jacksonville Transportation Authority. They are not aware of any effort to do that, he said.