BICYCLES, SCOOTERS AND SEGWAY'S ON THE SKYWAY 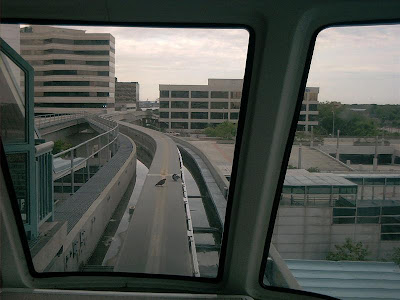 We have an ongoing discussion in Jacksonville about allowing bicycles on our Skyway (monorail), even though thousands of riders have brought aboard wheelchairs, shopping carts and baby carriages. Yet bicycles, especially in the urban core, usually come with experienced commuter-riders, or student-riders. They are perhaps the least likely to go on some imagined rampage down an elevated track with 440 volts AC hanging off the side. What we haven't considered is a policy that includes bicycles, Segway's AND scooters of different variety's.

For those not familiar with the Jacksonville Skyway system, it is a Bombardier Monorail system of 2.5 miles and 8 stations. It crosses the St. Johns River in downtown Jacksonville, which is a major shipping channel. The monorail cars are small, with a capacity of about 20 persons each and only have seats on the ends. Otherwise the lightly used system, is wide open in the center for all manner of passengers or cargo, with just enough standee poles to make things safe. This blog sees no reason why we should not follow San Francisco's lead on this issue.

ASSOCIATED PRESS SAN FRANCISCO – Bicycles are not the only two-wheelers jockeying for position on Caltrain cars.
For the last several months, the transit agency has been discussing whether to allow the increasingly popular Segway scooters onto trains, said spokeswoman Christine Dunn.
The initial idea is that only disabled people with permits would be allowed to bring the 100-pound devices aboard. The scooters would be hoisted onto train cars much like wheelchairs, which are propped on lifts manned by transit personnel, Dunn said.
The push to accommodate the battery-operated devices comes as Bay Area Segway dealers report a spike in sales. Jim Heldberg, owner of Pacifica-based Segway of San Francisco, estimates that 3,000 of the scooters are currently zipping around the Bay Area. Their popularity continues to grow as commuters hunt for alternatives to gas-guzzling cars, he said.
Caltrain officials also say the scooters will not cause train delays. The “dwell time” at stations — when trains stop before leaving — is enough to accommodate the Segways without delay, Dunn said.
“I think one of the issues we have is storage [of the Segways]. … Where are we going to put them?” she said. “The other would be safety. You don’t want them getting away from people on the platform or onboard trains.”
BART has dealt with similar issues. In June, a rider lost control of a Segway at the 24th Street station in San Francisco, sending the scooter into the path of an oncoming train. The scooter was struck, which halted service for more than half an hour, BART spokesman Linton Johnson said.
The accident, which raised safety concerns, led to a 45-day ban of Segways on BART trains. During the ban, the agency’s board of directors developed a new policy that requires Segway riders to obtain a permit. Initially, up to 50 permits are being offered.
It’s not known how many permits would be offered to Caltrain’s Segway riders.
At issue is how the scooters would safely squeeze into train cars at a time when Caltrain is reporting record ridership. The transit agency is already struggling to make room for bicyclists that get stranded on platforms during peak commute hours.
“We are still developing our Segway policy,” Dunn said.
At this point, she said, what Caltrain directors have determined is that the Segway — which will be classified as “mobility devices” — will be required to meet standards of the Americans with Disabilities Act. The devices can be no greater than 30-by-48 inches, with a total weight, including the occupant, of no more than 600 pounds, Dunn said.
The Segway draft policy will be presented to the Caltrain board of directors Nov. 6. A similar policy will be presented to the SamTrans board the following week.