If it came to a choice Rail or Air?

WHAT WE OFFER FLORIDA - MIAMI - ORLANDO - TAMPA - CAN'T TOUCH THIS! 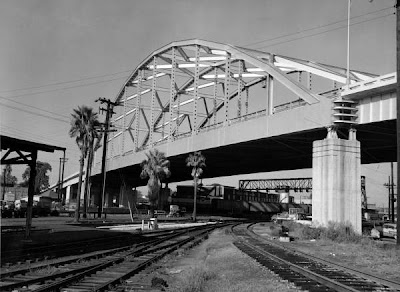 Myrtle Street Interlocking Tower in the "throat" of the old Jacksonville Terminal, under I-95, note the metal cantilevered multi-tracked signal bridge visible just under the deck of the freeway. These 12 or so tracks fanned out into more then 29 making this the largest depot South of Washington D.C.

Would Jacksonville benefit greatly from a rail comeback? Wouldn't our natural location as the "Gateway City of Florida" and our grand old Terminal downtown put us in position to take the top roll in RAIL-FLORIDA? As airlines fail around us in this economy, and fuel and flight prices are soaring, only a renewed interest in Amtrak or Rail Passenger Services will make economic sense.

But beyond fuel and costs, just how green is rail? Would an Orlando-Like JIA make us a world leader in a failing industry? Certainly we'll pick up some international flights, and perhaps some long distance air routes in the future. That might require some runway stretching. Moreover our local airline service is likely to all but vanish, surrendered to land transportation. So just for the sake of environment here, lets look at a "blind" expansion of JIA/JAX and also a great rebuilding of the old Union Terminal downtown for Commuter Rail, Regional Rail, High Speed Rail and Amtrak.

From the UK comes this comparison based on the same question which is now facing London:


"Comparing air with rail it would seem at first glance that aircraft have smaller fixed installation requirements - after all, they just need an airport at each end. One has to consider the vast quantity of land - and buildings - required for airports, however. Runway 26L/08R at Vancouver International Airport is 9940 x 200 feet x 1.5 feet (runway depth estimated) - 3 million cubic feet - and cost $100 million. The volume of a concrete railway sleeper is about 0.1 m3, or about 3 cubic feet. Thus the volume of concrete in one runway is equal to the volume of concrete in a million concrete railway sleepers (cross ties), which are normally spaced at 650 to 760 mm intervals. A million sleepers would thus support 650 km of railway track. Interestingly, with the railway there is an alternative: composite ties, which can be (and are) made of recycled post-consumer waste plastic. I don't think that's an option for aircraft runways. "


Lastly, in Florida we should keep in mind our fragile water aquifer, all pavement, including runways repel water and prevent it from recharging through the ground. Railroads by their nature, on a bed of rock, allow the rain to re-enter the soils.


Just a couple more reasons to keep our focus on Jacksonville Union Terminal, it's Tunnels, Tracks and getting the Prime Osbourne Convention Center moved somewhere else.
Posted by Bob at 12:22:00 AM