37 YEARS TO KILL THE SYSTEM AND NOW IT'S AMTRAK TO THE RESCUE! 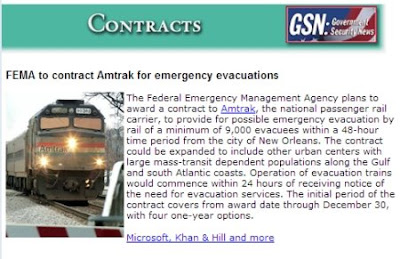 FEMA Announcement of new Amtrak Partnership
Greyhound, Amtrak routes canceled as city takes over transit station
Saturday August 30, 2008, 11:10 AM
CHRIS GRANGER / THE TIMES-PICAYUNE
With Hurricane Gustav barreling toward Louisiana, Greyhound bus and Amtrak train service heading out of New Orleans from the Union Passenger Terminal this weekend has been canceled to accommodate the city's free evacuation program, leaving an unknown number of travelers holding worthless tickets out of town.

New Orleans city officials informed the transit firms all routes out of the downtown station would have to cease at 6 p.m. Friday, spokespeople for the companies said. "It's not our choice," spokeswoman Abby Wambaugh said. "It's what we had to do." Greyhound routes to and from Mobile, Houston and Baton Rouge are canceled until further notice, according to the company's Web site. An Amtrak spokesman said several train routes are suspended through early next week. The city owns the terminal, which is being used as a staging site for the city's free evacuation program. A city spokesperson could not immediately be reached for comment. City buses began shuttling around designated pickup sites in New Orleans at 8 a.m. today, ferrying residents to the Union Passenger Terminal. There, they can board state-chartered buses to shelters in north Louisiana and Tennessee. Elderly and infirm residents who arrived at the transit station can board Amtrak trains to Memphis. Similar programs were in place in Jefferson, St. Bernard and Plaquemines parishes Wambaugh said passengers holding canceled bus tickets may use redeem them for face value at any time within the next year. She did not know how many tickets were purchased for travel out of New Orleans this weekend. Amtrak officials called passengers scheduled to travel from New Orleans on Friday and notified them of the change, according to the firm's Web site. Refunds are available.

BLOGGER NOTE: As of Monday morning, Amtrak and the buses along with the highways have managed to evacuate 95% of New Orleans. While regular train and bus service was suspended, outbound trains and buses stood in lines. One Amtrak train to Memphis alone carried over 1,200 citizens. Buses were lined up 40 vehicles deep. Certainly a true case of Mass Transit at it's best.