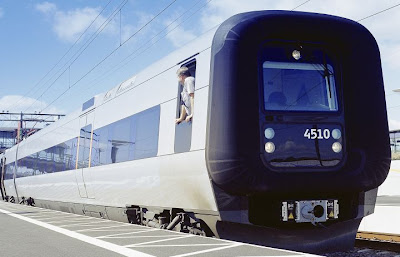 Another contestant in the coming struggle for a equipment supplier of new Commuter Rail in Jacksonville will likely be the fantastic and futuristic Contessa Trains. As our Commuter Rail system would be as long or longer then South Florida's, these trains are ideally suited for short or medium distance luxury and comfort. Bombardier Transportation has received an order from the Danish State Railways (DSB) for the delivery of 10 three-car Contessa trains, valued at approximately $118 million, with a foreseeable option of 30 additional trains.
The trains, which can reach a maximum speed of 111 mph, are capable of crossing the bridge between Denmark and Sweden, despite the different rail infrastructures used in both countries. A sophisticated dual system integrated into the vehicles enables the trains to automatically shift signaling and power systems when crossing the border. Other features of the inter-regional train include a middle-car design with low floors, and entrances giving access to disabled passengers and passengers carrying heavy luggage.
Another feature besides speed is found in safety, being railroad compliant and already in service by Amtrak in test corridors. The large black square around the ends is all a part of the high tech sell of these trains. They have the ability to split and rejoin while running at high speed! So a train coming into a junction does not have to waste time switching in the traditional sense. Now it is doubtful that ANY US railroad or the FRA would ever permit such operation in our country, the fact remains that a train that enters Jacksonville Terminal, could stop, unload - load, split up and leave for two destinations as two trains without anyone having to go outside or between cars.
If we decided to order the commuter configuration of these trains for our own system, they could be assembled in this country, perhaps in this city. The propulsion options are endless, with both diesel and electric options. Thus they can rightly be called either DMU's or EMU's depending on the power ordered. The trains will be leased by the National Rail Authority, which will make them available for DSBFirst, when the company takes over the Öresund services as of 11 January 2009.
The vehicles in this order and propulsion equipment will be designed by Bombardier in Sweden, with the propulsion equipment being manufactured at Bombardier’s production site in Västerås. The cars will be produced in Germany at Bombardier’s Hennigsdorf and Görlitz production sites, while the bogies will be produced in Siegen.
Posted by Bob at 8:16:00 PM