SAY GOODBYE TO THE AUTO ERA? 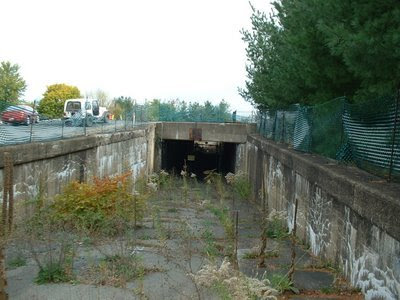 View of Cliff Street, Scranton, PA. Abandoned
August 31, 2008
Washington Post Writers Group
By Neal Peirce
For close to a century, the automobile has so boldly seized Americans’ imagination — sparking the economy, paving the continent, designing our neighborhoods — that even the thought of curbing its dominion seems unnatural.
But check what’s happening right now:
High gasoline prices are prompting millions of us to think again about how often, and how far, we drive our cars. Recent months have seen total vehicle miles driven nationally fall off sharply– a radical reversal of decades of increase.
Across the country, there’s pressure to reclaim city streets for the city’s own people. Fueling this pressure is the alarm raised over high accident and death tolls from pedestrians struck by autos and trucks.
The “Complete Streets” movement — urging city and neighborhood streets be made as welcoming and safe for pedestrians and cyclists as they are for autos — is gaining attention, now backed up by legislation pending in Congress.
Public transit use is enjoying a banner year across the country.
A vanguard of cities is banning cars from their public parks.
There’s increased effort — lead cities range from Seattle to Buffalo, Toronto to New Haven — to tear down ugly motorways that divide neighborhoods and occupy valuable space near city centers. (Demolition of a Milwaukee freeway in 2003 helped unify the city’s downtown area and sparked hundreds of millions of dollars of new development).
Bike stations — quick ways to rent a bike, cruise around a downtown — are being proposed across the country.
A new “Walk Score” website
(www.walkscore.com) lets users type in their home address and discover its “walkability” score — from 0 (”must have car”) to 100 (”walker’s paradise”).

BLOGGER NOTE: Jacksonville
ranks at the rock bottom of the walk score cities. Even our downtown with it's free shuttle buses, riverwalk and landing only gets 31 out of 100 possible
points, San Marco at 71 and 5-Points at 85 rank much, higher then our norm. Bottom line? We need walkable streets and public transit options NOW.

A few cities are starting to charge true market costs for parking on public streets. Example: fees of up to $40 for four hours near the new baseball stadium in Washington, D.C. The Nation’s Capital is, in fact, emerging as an epicenter of restraint on cars. One-way streets — virtual “freeways” through cities — are a first target. Already portions of Constitution Avenue N.E. have been transformed from a reversible commuter artery back to a quiet side street. Concerned about high pedestrian injury levels, the city may soon increase penalties — from $50 to $500 — for a vehicle encroaching on a crosswalk.
Some commuters are grumbling about Washington’s moves; a spokesman for AAA calls the Distict of Columbia “the most anti-car city in the country.” But city officials say they’re just intent on reclaiming Washington city streets for the people who live there, creating a walkable, bikable, transit-oriented metropolis.
In a parallel move, Washington’s Office of Planning wants to revise post-World War II zoning regulations — similar across the country — that require new buildings to provide ample off-street parking. Such city rules are totally outmoded, says parking reform advocate Donald Shoup. They inhibit smart compact development and drive up the cost of housing.
What made America such an incredibly pro-auto nation in the first place? Our wide open spaces, love of personal freedom explain a lot. But our streets, like those of all the world, were chiefly for pedestrians before the automobile emerged.
A new book by Peter Norton — Fighting Traffic — The Dawn of the Motor Age in the American City — recounts a concerted early 20th century campaign by auto makers and their allies to redefine city streets as motor throughways, with pedestrians “safely” relegated to sidewalks.
Unsatisfied with their initial success, automakers campaigned for more street space and Herbert Hoover, an engineer and future president, to convene a 1928 conference on traffic. It obligingly demanded more “floor space” for trucks and cars.
In 1939 came General Motors’ Futurama exhibit at the World’s Fair in New York. It depicted a world literally planned around motor vehicles. Superhighways (as wide as 14 lanes) would dominate the cities they passed over. The impression on the public was profound.
So are today’s auto-curbing efforts simply wisps in the wind? Possible– but not likely. Our once world-dominating automakers are tetering economically. “Peak oil,” mounting energy scarcity, climate change are realities.

Of course autos and trucks won’t disappear; they’re a key to modern nations’ economies. But one senses a new genie out of the bottle — a demand for streets, urban and town roadways that enhance peoples’ lives, restraining motor vehicles, not eliminating them. Every agenda from health (better air, less obesity) to aesthetics, energy-saving transit to quality of life, demands it.
And just think that our population will grow by 100 million by 2040 or so. Do we have the stunning amounts of steel, asphalt, public space to accommodate them as we’ve been living? We’re dangerously behind maintaining the vast but overtaxed roadways we have. Realism says this century simply can’t be a repeat of the heavily motorized 20th.
Posted by Bob at 9:14:00 PM