JACKSONVILLE REGIONAL RAPID TRANSIT - THE TRUTH BEHIND THE HYPE 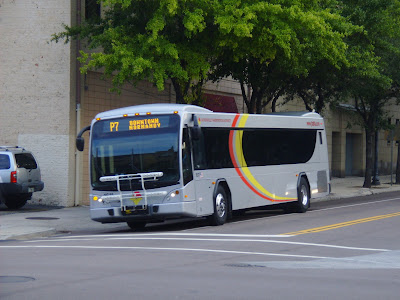 JACKSONVILLE TRANSIT TRUTHS
Adapted from an article in the Marin Independent Journal
By Robert W. Mann
Some bare truth about the promises and complaints made about a Jacksonville Regional Transportation System. Considering a complete system as Light Rail-Streetcars, and Commuter Rail, which for the purposes of this article I'll lump together under LRT. Also a network of limited Light-Rail-Lite-BRT lines to feed into the LRT trunk and perhaps the Skyway, all of this complimented by a network of neighborhood transit buses that would tie it all into a complete network. So is this promise of a Jacksonville Regional Rapid Transit System ( or JRRT) really a transportation Valhalla? I'll be honest and you be the judge.

Will JRRT solve the traffic jams on the freeway?

The simple answer is no. There is no realistic solution to the perpetual rush-hour traffic jam. Even widening our freeways and highways will not do the trick. Suburban highway gridlock is a nationwide phenomenon caused by a land-use model based on single-family homes sprawled over a wide area. What JRRT can do is provide an auto-free alternative.

Yes and no. The biggest effect of the JRRT system will be to take Clay, St. Johns, Nassau County -residing workers to their jobs in Jacksonville. As long as Jacksonville, housing and cost of living are higher, its labor force needs to live somewhere. Many logically choose more affordable surrounding Counties. It's in Jacksonville taxpayers' interest to facilitate the commute for workers essential to the county's economic health and to do so in an environmentally sensitive manner.

Are there are other less costly solutions?

The reality is the retail clerks, office staff, restaurant workers and building trades employees who live in Surrounding Counties and help form the backbone of Jacksonville's economy can't telecommute. A separate BRT quick way-busway costs almost as much as rail and will, in the end, result in more buses and more roads without a marked upsurge in ridership, bottom line? Good transit needs to "Mix your Modes", offer choices, and network. BRT alone without rail will fail. Likewise rail without BRT or quality bus feeders also fails. Futuristic dreams such as our Jetsons-style monorail, for anything but local shuttle service, will be far more expensive than rail even in the unlikely event that their technical aspects are perfected. Remember, Buck Rogers technology costs big bucks. Except for corporate sponsored systems, anyone who claims their proposal will not cost taxpayers a cent is either a charlatan or hopelessly naive.

Untrue. The Europeans, Japanese or Chinese are all expanding both their commuter and long-distance rail lines to 21st century standards. Modern rail systems are regarded worldwide as an environmentally sensitive way to move large numbers of travelers. It's the single-passenger petroleum-propelled auto that represents the technology of the past.

Will anyone ride JRRT once its in operation?

That is a fair question with no definite answer. Will the trains run empty or will long-term spikes in gas prices boost patronage past JRRT's projections? Proponents of new rail systems tout ridership successes and opponents emphasize failures. If the numbers are substantial, the naysayers will disappear. If they tank, the Jacksonville will never hear the end of it. Of course, when the Matthews Bridge was proposed, some claimed that few would ever pay a toll to cross a highway bridge to no where.
Posted by Bob at 1:10:00 PM